The 2017 Arts & Culture Trust Lifetime Achievement Award for Arts Advocacy is bestowed on Lindiwe Mabuza who, in the course of her working life, has been a college-level teacher, radio journalist, an editor, an ambassador, and a much-published poet and short story writer. Her contributions in mobilising the use of arts for democracy confirm that cultural activism played a significant role in abolishing apartheid in South Africa.

Lindiwe Mabuza was born in Newcastle, KwaZulu-Natal, in 1939 and has come a long way from her working-class beginnings. The family struggled to obtain the most basic necessities of life, such as coal and shoes, and often times were forced to do without. This was in no way a reflection of her parents’ efforts, though. Her father, who worked as a truck driver, and her mother, who was a domestic worker, worked hard for their family, but the cards were not in their favour. Eventually, Mabuza moved from her hometown to Soweto, pursuing her education in Johannesburg. It was in high school that she first developed her love for literature. Here, she was exposed to a wider variety of poems and other works than the traditional works she had been exposed to growing up. After high school, in the 1950s, Mabuza decided to leave South Africa to continue her education. She first attended college in the United States of America, studying home economics at Ohio’s Grailville Community College. Afterwards, she attended Roma College in Lesotho, receiving a BA degree there. Mabuza returned to South Africa in 1961 and applied for an instructor’s post at a teacher training college in Vryheid. But it was not an auspicious time to come home – the country was still reeling from the events of 21 March 1960, when a demonstration against the apartheid regime’s Pass Laws had left 69 protesters dead in Sharpeville. By the time Mabuza arrived, the Security Police had the power to arrest people for 90 days without trial or access to a lawyer.

Mabuza was refused the position she sought at the Vryheid Teachers’ Training College and she moved to Swaziland to become a teacher of English and Zulu. In 1964, she moved to the United States and enrolled at Stanford University where she completed a Master’s degree in English. She then obtained her second Master’s degree, this time in history, majoring in American Studies, from the University of Minnesota. In 1968, she became a lecturer in the Department of Sociology at the University of Minnesota. In 1969, she joined Ohio University as Assistant Professor of Literature and History. Her personal experience of racial segregation in South Africa, which led her to leave South Africa, and her exposure to the plight of African Americans in the Civil Rights Movement prompted Mabuza to join the struggle for the emancipation of her people in South Africa and Africa as a whole. In 1975, she joined the African National Congress (ANC) and moved to Lusaka in Zambia in 1977. At the time she was also a radio journalist and broadcaster for Radio Freedom, the ANC’s radio station, broadcasting from Zambia into South Africa. She became editor of Voice of Women (VOW), a journal for women in the ANC, in which women were kept up to date on the latest political and military developments of the ANC. VOW gave its readers a forum in which to express themselves and their feelings and to tell the world about their lives. 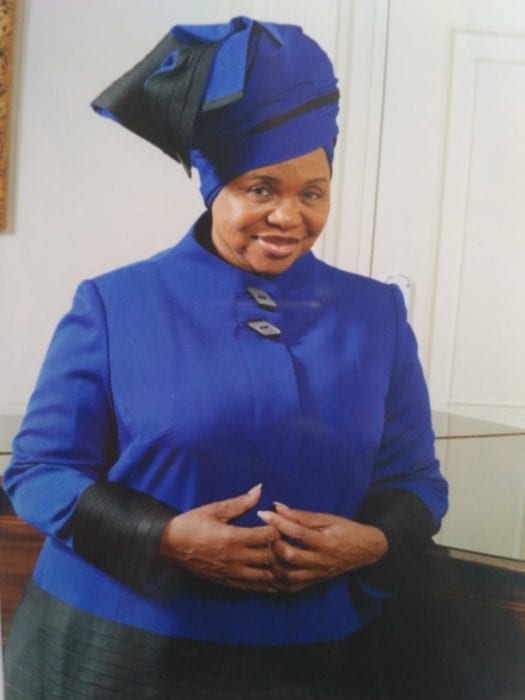 Mabuza’s collaborative poetry anthology Malibongwe, meaning ‘Let Their Name Be Upheld’, was published in 1980. In 1987, she compiled and edited One Never Knows, a book of short stories written by ANC Women. While she was intent on giving these women a voice, Mabuza had another purpose in publishing Malibongwe. Poetry, she decided, could be used as a potent pro-ANC cultural weapon in its own right. ‘Poetry is part of the struggle. You use the armed struggle; you use political agitation methods… You recite a poem. It’s better than a three-hour speech. It gets to the heart of the matter. It moves people.’ By then, the ANC had found another mission for Lindiwe Mabuza. Experienced and well travelled, in 1979 she was posted to the office in Sweden to open other ANC offices throughout Scandinavia, which required a great deal of tact and diplomacy. By the end of 1987, when the African National Congress sent her to America, the thirteen internationally based offices had grown to 28, with Finland, Denmark, and Norway joining Sweden’s long-established operation. Mabuza returned to the United States in 1986 as the African National Congress’ chief representative. She arrived shortly after the US government instituted sanctions against South Africa. Along with bans against buying South African minerals, agricultural products, textiles, and coal, the United States now forbade South African Airways planes to land on US airstrips. It was Mabuza’s job to organise boycotts of South African events.

She also spurred participation in anti-apartheid rallies, which attracted wellknown human rights activists like Jane Fonda, Harry Belafonte and tennis star Arthur Ashe. Most importantly, her efforts on college campuses all across America galvanised huge companies like Coca-Cola, General Electric and General Motors into withdrawing their investment in South Africa and closing their facilities. Later, Mabuza was key in organising Mandela’s first visit to America after his release. Although Mabuza had spent many years in political exile, she feels very strongly that ‘no, there was no sacrifice. Sacrifice would have been not to do anything about apartheid. Sacrifice would have been working and earning loads of money outside the struggle. That would have been a big sacrifice, not to be engaged in the struggle. So, engaging in the struggle was the most natural, normal thing. After all, children were being killed and children found themselves going right into the trenches. How could I not be involved when teenagers were being slaughtered? For me, art was an essential part of our struggle. We used to say that it’s a weapon, an extra weapon of the struggle.’ Mabuza continues to write poetry and also continues to encourage other people to write. ‘I am in the process right now of editing writings by young people who were children when Oliver Tambo was the president of the ANC. They are writing a book together, their memories of the time, what he meant to them, how they lived up to his dreams and aspirations in their adult years. It’s been so inspirational reading what they wrote, what they are writing… they were children in the 1970s and ‘80s. So I am doing that and I am also encouraging artists, for example I am doing a book of poetry, my own poems written for Oliver Tambo, for president Thabo Mbeki and for Olaf Palme, the late prime minister of Sweden who was assassinated.’