The 2017 recipient of the Arts & Culture Trust Lifetime Achievement Award for Literature, James Matthews, has been called everything from a ‘legend’ to a ‘die-hard dissident’. He is a profound thinker and writer who is as known for his moving poetry as he is for his wicked sense of humour, all matched by a deep regard for the world in which he lives, writes and thinks.

age is a beautiful phase

I am at peace with my journey

age is not an omen of fear

terrifying in its presence

age is a sanctuary that will

transform itself into an oasis

age is a beautiful phase

Born in Bo-Kaap 88 years ago, Matthews’ journey has been arduous, interesting and rewarding. When Creative Feel spoke to him about his ACT Lifetime Achievement Award, he explained that he suffers from epilepsy. ‘[The kind of epilepsy that I have] controls your mind to an extent. Sometimes letters are wrongly arranged in my mind, which means I can’t pronounce words. Or I would have a laps, which is why I also don’t sit on panels, because I would also have a blank period. And when the blank period comes, people will be speaking but I won’t be hearing sound or meaning of words, so I won’t be able to respond. ‘I didn’t realise, you see. And I’ve also been very self-destructive with my drinking.’ At 14, he suffered a head injury and even though he was taken to hospital, ‘they weren’t very advanced with a condition like that,’ he says. He stopped schooling for three months, but even when he went back, it was a struggle. ‘It was a disaster. I couldn’t remember dates, I couldn’t work out algebra.’ But in high school, there was a teacher, ‘Miss Meridith, I’ll never forget her name’, who made the class write compositions. ‘I got 21 out of 20,’ he remembers. ‘And she told the class, “James did not write a composition, James wrote a short story.” ’Starting out as a newspaper street vendor, Matthews worked his way up to head messenger for the Cape Times. The stories he penned began to be published in the magazine sections of the Cape Times and Cape Argus – Matthews knew he was becoming a writer. Although his stories were initially quite varied, his work became more political as apartheid and its force removals unfolded. 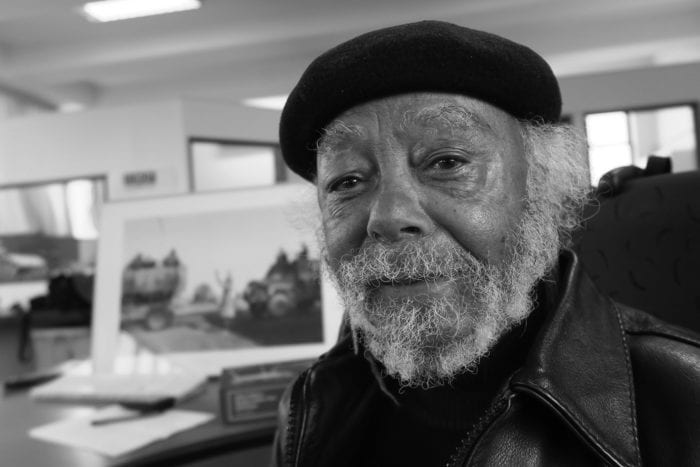 You have been denied too long

Fill your lungs and cry rage

You’re not going to grow up

Knocking at the back door

For you there will be no travelling

And sitting on the floor

The rivers of our land, mountain tops

It is yours, you will not be denied anymore

His anti-apartheid stories were conveyed in his first book, The Park and Other Stories, which he self-published in 1962. Matthews soon became a leading articular of Black Consciousness. ‘My first book of poetry came out in 1972, I Cry Rage, which incidentally was the first book of poetry read in parliament, and it was banned two weeks after it came out. Now, I wasn’t angry about it, I just felt that I was successful, getting that response from the apartheid government.’ Most of Matthews’ works were banned under the apartheid government, and many were translated and published overseas. For 13 years, he was denied a passport and was placed in detention from September to December 1976. Solitary confinement was widely used during the apartheid years; its purpose being to disorient, to dehumanise, to undermine the detainee’s sense of self-identity. James Matthews waged a struggle against this agenda with the one weapon the jailers couldn’t take away from him – his ability to turn words into poems. Over the years, Matthews’ poetry has covered a wide range of topics and emotions. Flames and Flowers (2000) combined poems with political content (flames) with love poems (flowers), which, he says, surprised people. At 79, he brought out a collection entitled Age is a Beautiful Phase (2008), ‘because I had not come across poetry paying homage to senior citizens’ and aimed to get across that ‘while you are getting older, you shouldn’t be afraid that you are losing yourself. No, you should be happy and embrace your age.’ This was followed by Gently Stirs My Soul (2015), filled with poetry that he calls ‘meditative’.

When asked in 2014 how he arrived at a point in his life where he writes about love and not revolution, he answered that love is a revolution, albeit of a different kind. ‘I no longer write dissident poetry. Back then I did what I had to do. I wrote to overthrow a racist regime. My writing was meant for the voiceless people in the townships. Now I write love poems. When I write about love, I don’t bullshit.’ Now, in 2017, with two honorary doctorates later, one in 2013 from the University of the Western Cape and one in 2016 from Rhodes University in Grahamstown, Matthews has come full circle. After two, long, standing ovations before and after he was awarded his honorary doctorate in a packed Guy Butler Theatre at the 1820 Settlers National Monument at Rhodes University, Matthews said he still plans to write more political poetry. ‘I am not really happy how things have turned out. The president lives in a palace, but around him, people live in poverty.’ James Matthew is still the dissident poet who has always felt the need to fight oppression.