In receiving the 2017 Arts & Culture Trust Lifetime Achievement Award for Visual Arts, Adrian Kohler and Basil Jones are being honoured for the work they have done with the Handspring Puppet Company since 1981. Creative Feel caught up with them to find out more about this internationally-renowned company and its founders.

Based in Cape Town, the Handspring Puppet Company provides an artistic home and professional base for a core group of performers, designers, theatre practitioners and technicians. Handspring’s work has been presented in more than 30 countries around the world. When asked what it means to get the Arts & Culture Trust Lifetime Achievement Award and recognition at this stage in their career, Basil Jones was happy to share his thoughts with Creative Feel. ‘It is, of course, a great honour. And it happily seems to invite us to reflect on our trajectory, on our “back story”.’ Some of this important history includes, ‘Adrian’s teenage years when he was making puppets with his mother, Thelma, in a riverside village outside Port Elizabeth; the Puppet Space at the Space Theatre in Cape Town – South Africa’s first non-racial theatre; the Rasta puppets we made with working-class kids at the WELD Community Arts Centre when we were living in Birmingham UK in 1977; the puppet plays Adrian devised with people in remote areas of Botswana as part of the National Popular Theatre programme; the five years of children’s productions we toured around South Africa, living the gypsy life in a converted truck and staying in caravan parks all over southern Africa; the giant egret with its five-metre wingspan, which we made for the first Gay Pride March in Hillbrow Johannesburg in October 1990; and long tours through Europe with the Kentridge productions where we drove down the autobahns and the autostradas sandwiched into a minivan, and performing at theatre festivals. ‘It’s been a varied career.’ 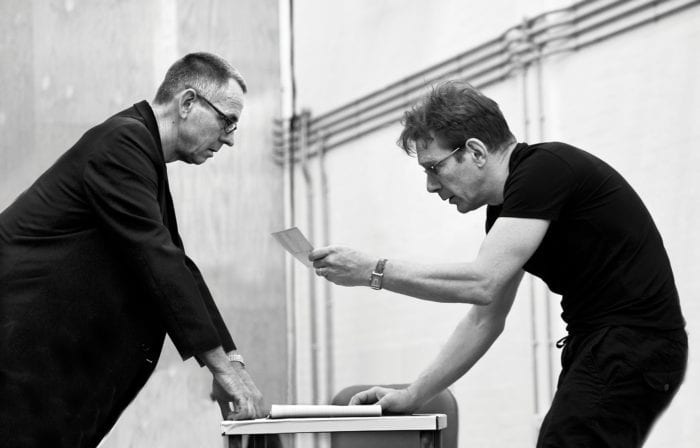 And why Handspring Puppet Company? What attracted you to the medium of puppetry? ‘Adrian’s mother was a puppeteer and his father was a boat builder. So his transition into professional puppetry was almost predestined,’ says Jones. ‘I was a sceptic. I admired neither Punch and Judy, nor the Muppets. But Adrian seduced me with an African puppet he found in Johannesburg. It turned out that it came from the ancient Bamana puppetry tradition in Mali, West Africa. We were living in Botswana then and I was a graphic artist at the National Museum and Art Gallery. I asked Alec Campbell, my boss, if we could contact Vittorio Meneghelli, the person who sold Adrian the puppet. It turned out he had a whole collection of these amazing “moving painted sculptures”. He loaned them to Botswana for an exhibition. We then persuaded him to sell them to the museum and I became their curator. After that, it was just a small step for me to assent to Adrian’s suggestion to return to South Africa and start a puppet company.’ The Company has enjoyed many collaborations with other artists and organisations over the years, but which ones stand out? ‘I think my most important collaboration has been with Jane Taylor and Premesh Lalu,’ says Jones. ‘Jane is a highly regarded academic, novelist, playwright, director and will be the founding director of the Laboratory of Kinetic Objects (LoKO), a new postgraduate research centre based in Salt River/Woodstock in Cape Town, where scholars from around the world will be able to pursue puppetry arts.

‘Premesh Lalu is the Director of the Centre for Humanities Research (CHR) at the University of the Western Cape. One of their three research platforms is “The becoming technical of the human”, which fits quite closely into our concept of the puppet as an emotional and intellectual prosthesis of the human. Premesh has been a close collaborator in the development of the Barrydale Parade and Performance that takes place annually on the Day of Reconciliation. He has an extraordinarily perceptive mind, magnificent people skills and an invaluable understanding of the politics of culture in South Africa and internationally. ‘It’s important to acknowledge that a good deal of Handspring’s expertise as puppeteers has to do with a tough-minded questioning of our theatrical choices and mindfulness of the important role that puppetry has to play in theatre in general. It’s easy as a puppeteer to dumb things down. Jane and Premesh help us to raise the intellectual bar and that in turn helps us to make more inspired artistic choices.’ Training and mentorship are vital to the Handspring Puppet Company, to create the next generation of puppeteers. How does one do this? ‘We are fortunate that the so-called “next generation” took the initiative themselves and started their own puppet company. This happened when Handspring had to make a whole group of our employees redundant because the Royal National Theatre no longer needed us to make further sets of War Horse puppets. 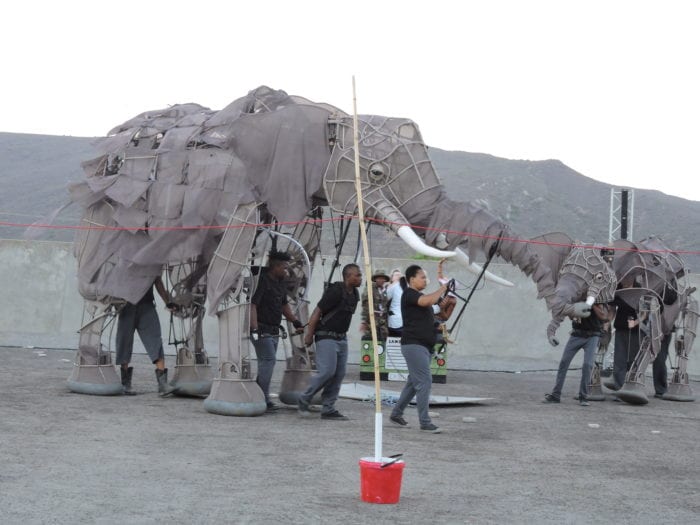 So two of the people we trained left the company and were joined by another two individuals, to start Ukwanda Puppetry and Design Collective. To our knowledge, this is South Africa’s first black initiated and black run Puppet Company. We are very proud of them and we are affording them every support we can muster. Their first play, Qhawe, received a Silver Ovation Award at the National Arts Festival and their puppets have been central to the Barrydale Parade. This year, in fact, they are the lead designers. They have travelled abroad too and their giant bird was a big success at the Heart of the Beast puppetry festival in Minneapolis, where they have been invited to return next year. They will be part of LoKO, assisting visiting puppeteers by helping them realise their puppet designs. Their studio will be in the renovated LoKO building in Greatmore Street, Woodstock, and it is from there, later in 2018, that they will be launching their second puppet theatre production.’ And finally, we had to ask what the talented duo are busy with at present and what direction their artistic talent is taking them in. ‘We are still very much interested in presenting “animal being” – that is animals as animals – at the centre of a piece of theatre,’ says Jones. ‘This is always a big challenge because animals don’t use human language. They have their own language. So one has to discover and research that language and then find a way of presenting this animal language on stage in such a way that the audience can understand it. We’ve done this with chimpanzees, a giraffe and of course horses in War Horse. Now we are at the very beginning of a new production centred on wolves.’