Writing from Phnom Penh in Cambodia, Indra Wussow explores how the country’s difficult past influences its residents and artists today. Cambodia still struggles with its history. Even though its capital, Phnom Penh, has ostensibly become a modern city with its high rises, parks and fancy restaurants, the past still plays a dominant role in the lives of so many of its inhabitants. Due to unresolved issues concerning ownership of properties in the city, investors and Cambodian international joint ventures have been able to seize properties and evict former occupants. Remember that the Khmer Rouge evicted the entire city of Phnom Penh in 1975 and many of these ex-city dwellers did not survive slave labour and starved in the countryside or died in the killing fields. When the Vietnamese invaded in 1979, many Cambodians flocked to the city and took over a property that seemed empty; title deeds and legal documents were non-existent. This makes it easy to grab the best real estate and evict those who have been living there for many years. Two years ago Phnom Penh still seemed unable to shake its difficult past. There were traces of it everywhere in the city: a bullet hole in a wall, overcrowded flats, or abandoned flats where trees and bushes grew within cracked walls. 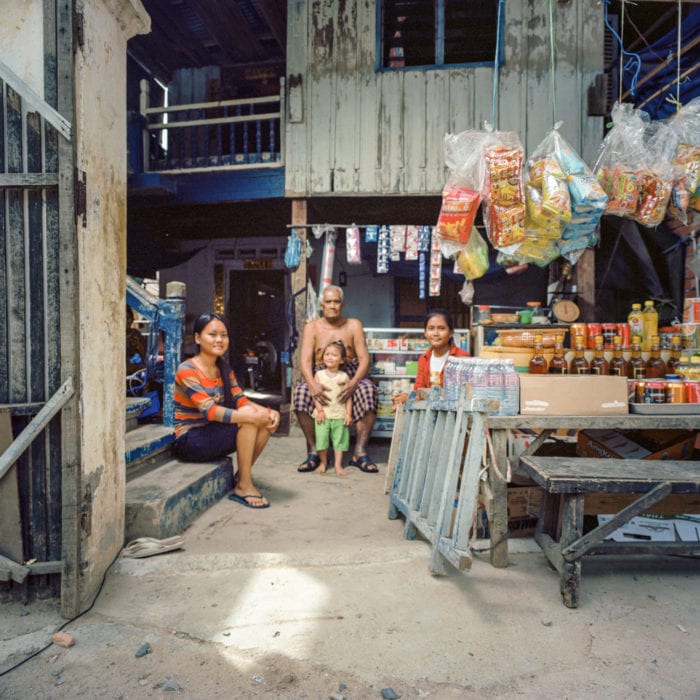 Now, more and more places are being renovated and the beautiful urban architecture of the independence era is flourishing. Less chaotic, less lively, the city seems to have calmed down and lost much of its distinctly Cambodian form of nervousness. An immediacy of life that took shape after the traumatising years of the Khmer Rouge and the subsequent civil war. Lake Boeung Kak became the first prime piece in the city centre earmarked for new luxury housing for the nouveau riche. An investment by a senator’s wife and Chinese investors, this operation went terribly wrong as the lake was filled with sand and surrounding houses began to sink in. Boeung Kak is now a wasteland. Where once birds sang and fishermen’s houses lined its banks, there is a useless desert. The fishermen, who relied on the lake as a source of income for their families, were evicted and the few remaining families live in poverty along what was once a shore. They struggle to survive. The lake also played an important role in the drainage of the city. Now, in a country with a long rainy season, huge parts of the poor quarters of the city turn into a stinking cesspool that makes their inhabitants sick. Diamond Island is another new investment by the corrupt Cambodian elite and its partners from China, Japan and Korea. It is an artificial island at the confluence of the mighty Mekong River and the Bassac River.

High rises, whose flats and offices mostly stay empty, a prestigious golf club (Cambodian president Hun Sen is a passionate golf player) and a pompous theatre, pretend to be there for a new class of wealthy citizens. The ghost town feel of the place adds to the suspicion that these real estate investments are just that – an investment of money without caring for the people. The deserted amusement park shines like a mirage and no children play there. Over the last few years, the Sylt Foundation has been working with Sa Art Projects, an important art initiative that networks its artists globally and also connects them with the city and its people. A big part of their programme was the investigation of the story of Phnom Penh and their inhabitants. Their first residency space was in the so-called ‘White Building’ in downtown Phnom Penh, not far from the Independence Movement and also a stone’s throw away from the new Diamond Island. In the 1950s and ‘60s, Cambodia, under the reign of King Sihanouk, grew rapidly and the population of the city increased immensely. In 1961, the king initiated the building of social housing; a complex of buildings, painted in matching white, with communal housing and flats for artists. After being evicted during the Khmer Rouge, the people came back; new inhabitants lived next door to survivors. The building is 540 meters long, hosts 468 flats and more than 2 500 people. Some paid rent and some owned the flats, but nobody knew exactly. As these people had no advocate, it came as it had to come. 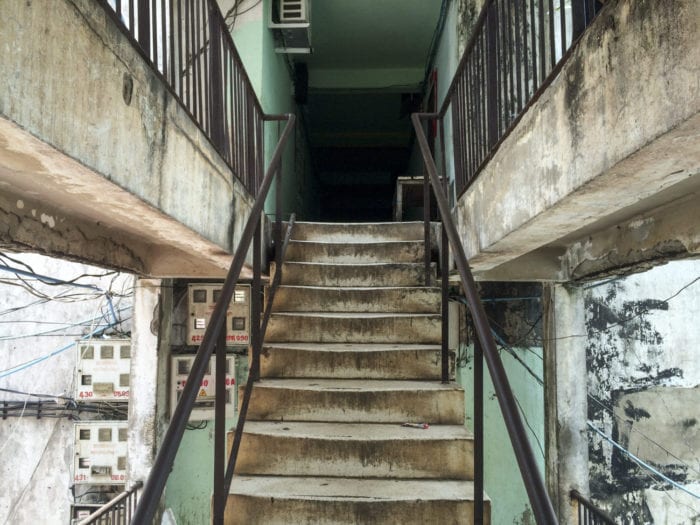 International investors and the government demolished this slum in the centre of the city to offer modern housing for the affluent, with little or no compensation for the previous inhabitants who cannot afford to move into the new space. Cambodian artist and curator Lyno Vuth and his artist group had to move to another space further away from the city centre. Due to their long engagement in the White Building, their artworks and projects give important insight into the real structure of the city and how ordinary people cope with moving from one home to another in times of real estate capitalism. They tell their story of the city and the appropriation of it by unscrupulous business people who built their assets on the backs of the dispossessed. Lyno feels bitter about what happened to the White Buildings. ‘Of course the housing situation there was awful and there should have been renovations. One should have taken more efforts to offer decent housing for the current inhabitants, who had been living there for many decades now.’ 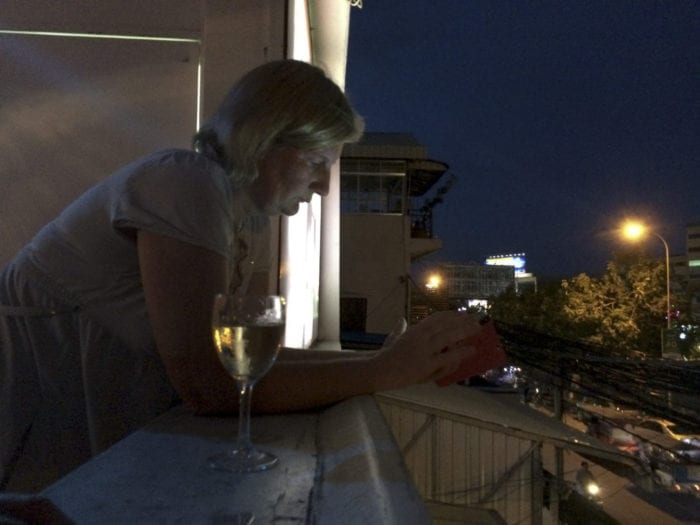 The needs of ordinary people play no role in today’s business strategies. This is not only due to a globally operating capitalist system but also to the fact that the brutal history of the Khmer Rouge and the Civil War has not been dealt with publicly and the scars of the hidden trauma still affect society as a whole. ‘To heal the wounds of suffering through self-agency and the beauty of life is the most important step for the civil society,’ says Youk Chang, founder of the Documentation Center of Cambodia. His work and role show impressively how one single person can change the world. His approach is to collect testimonies from the time of the Khmer Rouge, to bring the perpetrators to court and to give the victims their voice back so that they can demand justice. In 2018, his new museum will be built in the centre of the capital. The Sleuk Rith Institute was designed by icon Zaha Hadid and is dedicated to reconciliation and education for the future. This architectural landmark celebrates the will to survive, to overcome trauma and to fight political oppression. It will be located in the centre as a lighthouse of hope and dedication amidst the capitalist conquest of its environment.