The creators of The Gruffalo, the story of a mythical beast and a clever mouse that has been translated into 40 different languages and sold over 10 million copies, have again collaborated to produce a wonderful book, this time about some rather special African animals, The Ugly Five. Julia Donaldson and Axel Scheffler‘s brand-new picture book is a jubilant celebration of animals who are often rather unloved. The funny, heart-warming rhyme is a joy to read aloud, while bold, comical illustrations bring the savannah spectacularly to life. Creative Feel caught up with the authors to find out more about this brilliant South African book. 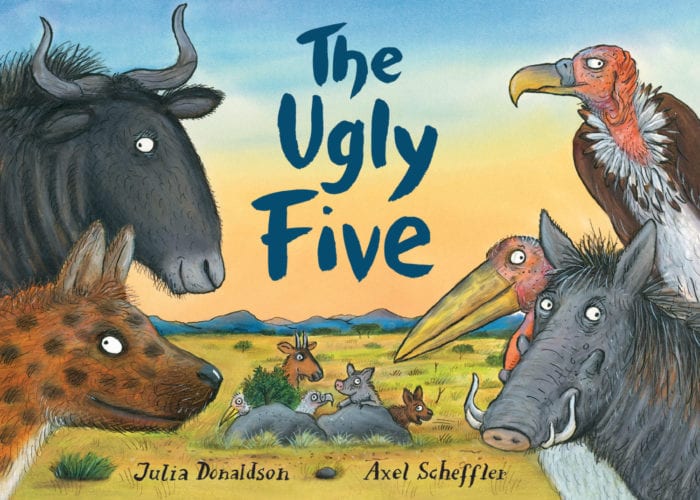 Who needs cute critters? It’s time to celebrate ugly animals! The Ugly Five are proud of how hideous they are. There’s the bristly wildebeest, the yucky bald vulture, the spotty hyena and the gangly marabou stork. Not to mention the warthog, who is covered in – you guessed it – warts! As they swagger across the African savannah, showing off their glorious yuckiness, their cheeky rhymes will make you laugh out loud. Don’t be disgusted. They might be gangly, warty, bumpy, bristly, spotty and stinky – but they’re perfect just the way they are! Donaldson was inspired to create the story after visiting South Africa last year February for an extended promotional tour of her books. Creative Feel also managed to speak to her then, just before she went on a working holiday to Madikwe Game Reserve and this current interview was a follow-up to find out more about her trip where she saw the ‘big five’ – lions, leopards, elephants, rhinos and buffalos. However, she was more interested in ‘the ugly five’ and wrote a story about these animals ‘reclaiming’ their uniqueness. When asked about the title of her book, she laughs, ‘Well I didn’t choose them I’m afraid, they were there already, “the ugly five” is something that already exists. During the safari, we saw some wildebeest and our ranger told us that the wildebeest is one of “the ugly five”, and explained to us that the other ones are the spotted hyena, the warthog, the marabou stork and the lappet-faced vulture. So the animals were given to me: I couldn’t change who “the ugly five” were.’ Donaldson wrote the whole text first and sent it to the publisher who then sent it to Axel Scheffler because, as she tells us, she really wanted to write this book and thought if she said to Axel, ‘how would you feel about doing a book about South African animals, I would’ve been a bit frightened in case he went, “mmmm not so sure about that.” I’d prefer to present him with a ready-made text and if they don’t like it then that’s… but luckily Axel did.’

There’s the bristly wildebeest, the yucky bald vulture, the spotty hyena and the gangly marabou stork. Not to mention the warthog, who is covered in – you guessed it – warts!

Asked how difficult it was to write this wonderful rhyming singing text, Donaldson freely admits, ‘No, it wasn’t easy, I think often, if you see a text, it looks as if it was probably difficult to write and if you see a text that is a bit awkward, it was probably easy to write because you have to keep tweaking it till it, you hope, that it trips off the tongue. So when I actually wrote this, because it’s quite patterned, every animal has the same number of lines and the same rhyme scheme. I worked on line one for each animal, and line two for each animal. I had to make sure, for instance, when they had their chant and the ugly one and the ugly two, with the ugly three, ugly four, I had to have two words that rhymed because it would be pointless if I wrote all the chants for the ugly two, three and four, and if I couldn’t find two words to rhyme with five – then I would have to change the rest. So I very much did it line by line or section by section, and that whole process probably only took a couple of weeks but it was very hard. I was tearing my hair out and luckily I have a very understanding husband because he encourages me and praises me along the way – so that keeps me going.’ Scheffler elaborates on how he works with Donaldson, ‘Well I would get the finished text and I would have to do it from scratch. I haven’t been to South Africa but my father went to South Africa quite often so I had this old book from the Kruger National Park with animals, and of course now there are many ways to research the animals, so I did try the internet, it’s so easy these days, except for the babies, I couldn’t find them and feel that there are limits even to Google search.

As they swagger across the African savannah, showing off their glorious yuckiness, their cheeky rhymes will make you laugh out loud

‘I would first develop the characters, so I would have to do the research because I was not familiar with all of them, I mean I knew the animals, but the lappet-faced vulture is quite a specific species, so I had to look that up and then I would draw the characters and then get the whole story first and talk to the art director and to the editor about it and that’s really my working process and when everybody is happy, including Julia, I can start doing the actual artwork.’ Apparently, they talked about whether to exaggerate the animal features and make the characters look more comical, but then thought it would be nice to keep them close to their natural look. Scheffler does a pencil sketch first, then uses a metal dip pen for the outline of the drawings. He paints everything and uses colour pencils on top. There are a lot of layers! ‘That’s really my style of drawings that I have established, I’ve been drawing for over 30 years now, so that is the style that I use, how I do picture books.’ When Donaldson was last here, she talked about expecting a sixth grandchild to be born shortly after her return to England and ‘now, I’m expecting the seventh grandchild, but I tend to read other people’s books to the grandchildren, because I’m afraid if I get one of them on my knee and read one of my stories, and they wriggle or get bored, then I’ll be mortified.’ Let us just hope that somebody reads their grandmother’s books to them, you simply cannot stop laughing and singing along with The Ugly Five and, of course, in typical Donaldson fashion, there is just that beautiful little twist at the end of the story that makes you feel happy.