Jaco Van Schalkwyk joined the ‘Absa family’ in 2013 when he won the Absa L’Atelier Second Merit Award and a residency at the Sylt Foundation on the Sylt Island in Germany.

This year Van Schalkwyk was asked to create the trophy that was given to all five winners of the L’Atelier. Jaco Van Schalkwyk’s geometric wood and metal trophies were created in collaboration with designer/manufacturer Sebastian Rivett Carnac. With their intricate, botany-inspired oil on wood paintings, the trophies continue the theme introduced by Van Schalkwyk in his exhibition -arium, which took place at the Barnard Gallery recently. The following is an extract of the essay that Prof Karen von Veh, Head of the Visual Art Department of University of Johannesburg, wrote for the -arium catalogue: ‘I first met Jaco Van Schalkwyk in 2015 when he was part of the South African exhibition that I, and my co-curators from UJ, took to the Beijing Biennale. Van Schalkwyk was given an award, by the exhibition sponsor, to accompany us to Beijing and that trip became his introduction to Eastern cultures and the notion of “the exotic other”. It was not only the obvious difference of culture and artefact in China that raised his awareness of otherness, however. One of our curatorial team, Shonisani, became an object of wonder to the Chinese in Beijing.

Wherever we went there was a small entourage of fascinated observers following us and trying to get close enough to touch her black skin or the long braids of her hair. The boldest even asked to have their photographs taken with her. When newspaper photographers were sent to document our exhibition for the press they quickly forgot their official duties and spent time photographing Shoni, asking her to pose in front of the artworks and to turn her head so her braids were visible (much to her irritation). For Van Schalkwyk, this identification of Shonisani as an “exotic other” was a reminder of his own othering as a child. He was brought up in a secluded religious community, Jatniel, where the women wore blue dresses and the community eschewed many of the modern conveniences of secular life. His first interaction with the world outside this community was when he went to primary school. He felt alienated and was bullied by other pupils because of his and his family’s “otherness” and this experience, along with Shoni’s experience in China, has made him particularly aware of the sensitivities involved in displaying or recording the “exotic other”.

‘Van Schalkwyk is an avid photographer of life around him including people, landscapes, oddments and things that he encounters. He is a collector of such visual material, partly physical objects but mostly through photography and it is from the results of these collections that his latest exhibition has emerged. It is a collection of note, a Wunderkammer, a ‘curiosity cabinet’ of oddments and items gathered on his travels, but they are not just presented as trophies. These items and images have been carefully considered, reconfigured and manipulated, either in painted or physical juxtapositions, to create a ‘Theatrum Mundi’ – a theatrical reimagining of his experiences as both omniscient recorder and subjective participant. There is a long history of collecting and displaying difference – from Renaissance interests displayed in Medici studiolo, to items taken from voyages of discovery and colonialism seen in Habsburg Wunderkammern. In 1594 Francis Bacon extolled the merits of a collection of both crafted objects and natural wonders as a necessity for the educated gentleman.

This later led to a veritable mania for collecting particularly in Britain, with examples such as Sir Hans Sloane’s prodigious collection from the 17th century, which ultimately became the basis for the British Museum, or the 19th-century collection of General Pitt Rivers, now a museum in Oxford. Historic collections have come under critical scrutiny in contemporary scholarship, with questions raised about the self-promotion and cultural superiority displayed by the collectors, particularly those gathered and exhibited during the years of Europe’s rapid colonialism. Van Schalkwyk is justifiably concerned with the problematic nature of consuming and displaying another culture and to avoid exploitation he has attempted to level the playing field (so to speak) by inserting some evidence of himself into many of the works. Sometimes he is there as a reflection or shadow barely discerned. If you look very carefully, for example, at the glass box containing a scale, there is a painting of a man (Tumi) peering out of the box, taken from a photograph of Tumi looking through a window at the Sylt Foundation in Johannesburg.

Through Van Schalkwyk’s manipulation of his photographic sources and with each of the subsequent iterations, his presence is manifest and he becomes both the gazer and the subject of the gaze, the collector and the object of collection

Overlaid on the image, from the original reflection on the window, you can just make out a shadowy outline of Van Schalkwyk holding his mobile phone while taking the original photograph. Tumi has been freed from being an exotic specimen inside the museum/gallery because he is the source of the gaze. He is outside looking into a window, perhaps at a museum display, and in this image Van Schalkwyk is there with him, looking through the glass box and out at the gallery visitors. Sometimes Van Schalkwyk appears as the main subject, as seen in his self-portrait where he is ironically holding up a frame within a frame, or his disembodied eye in a smaller work, referring to the gaze and questioning who is gazing at whom. Sometimes his presence is on display metaphorically, identified in his obvious interventions with source material. Through Van Schalkwyk’s manipulation of his photographic sources and with each of the subsequent iterations, his presence is manifest and he becomes both the gazer and the subject of the gaze, the collector and the object of collection.

‘As viewers of these works, we are also complicit in the power of the gaze. In an attempt to raise awareness of the power play involved between observer and observed, Van Schalkwyk has included many works with mirrors or glass surfaces where our reflection becomes part of the image and we look back at ourselves through the framework of another culture. The ethnographic gaze is thus inverted, creating a “reflexive awareness that the extraordinary is ever present in the familiar” (Davison 2004:15). An example of this can be seen in the small jewellery box containing a painting of Barong (a Balinese god) that can only be viewed as a reflection in the mirror that has been inserted inside the lid. When we open the lid to look inside, both viewer and painting are visible in the mirror simultaneously. There is sense of active voyeurism in this and other boxed works into which one must peep. These works reference the voyeurism of the world traveller who is looking into other cultures, taking photographs of their environments, their homes, or their temples. The photographs of these encounters become trophies to bring home and the camera, or these days the mobile phone, becomes a contemporary portable Wunderkammer in which these trophies are displayed for viewing.

Like many curiosity cabinets, the objects to be viewed appear eclectic and this too is mirrored in the exhibition where there is no attempt to retain cultural exclusivity in the objects. The jewellery box is a fairly common object from China, the painting inside is sourced from Bali, then you include the polyglot of viewers… These overlapping cultures exist throughout the exhibition as paintings of Myanmar scenes are framed in carved wood from Bali, or a sculpture reflecting African mythical beliefs by Credo Mutwa is reproduced as a painting within a box from the old Republic of South Africa. The conversations set up between different cultures and different historic periods are as interesting and thought-provoking as the visual conversations set up by the encyclopaedic juxtaposition of landscapes, people, artefacts, curios, arbitrary objects and furniture… ‘It is clear that the current exhibition, -arium, appears to encompass many of the themes, content and physical items from previous exhibitions, befitting the eclectic nature of a curiosity cabinet.

‘We can find here reference to landscapes, both exotic and apocalyptic, Baroque dramatic lighting and scenes or people from Van Schalkwyk’s childhood at Jatniel. Earlier content is now juxtaposed, however, with an intriguing collection of both mundane and exotic oddments presented in various modes, from painting to assemblages to sculpture and digital media. The underlying thread that gives this eclecticism some coherence in -arium is the notion of the photograph as an object. Van Schalkwyk says he wanted to create a ‘still life’ exhibition. To this end, the photographs themselves are the still-life objects which he paints, rather than the items captured in the images. One can sometimes see the edges of a photograph set into another scene, or identify the reflections that would appear on the surface of the photograph, or shadows falling onto the photograph when it has been placed next to other items or images. All these ‘clues’ would not have been present in the original scene as it was being shot. This is particularly evident in the large images of exotic ferns and plants where one can see overlapping edges of the different source images, or one photograph inserted into the landscape of another, alerting the viewer to the artist’s intervention in these apparently natural scenes.

‘For Pteridomania, Van Schalkwyk recounts how he took a photograph on his mobile phone of a natural forest scene in Vietnam, then took the printed photograph into his own garden and photographed it again in situ. By doing this he identifies how the ‘exotic’ is so often assimilated and normalized in our lives. Johannesburg suburban gardens are often recreations of ‘exotic locations’ as they include rain forest vegetation, ferns or palm trees that are alien to the indigenous Highveld landscape. The subject matter in the first image now has real plants, very similar to the forest vegetation depicted, which surround and overlap the photograph and cast shadows onto it. These shadows are recorded in the second photo which then provides the reference for the painting. A trompe l’oeil effect can be discerned in the obvious fabrication of these images, or in the reflections on photographs that are painted into scenes as if they are part of reality. 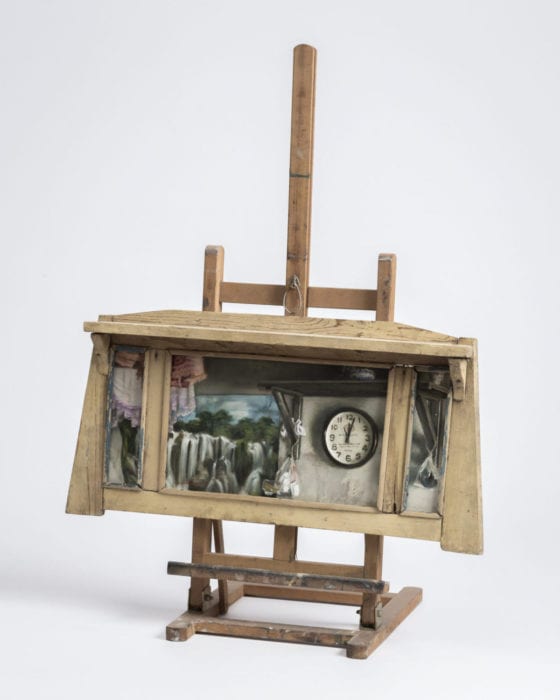 ‘Trompe l’oeil is not about attempting to mislead the viewer into accepting the ‘reality’ of these images but is instead revealing the trickery involved in the production of each simulation. Ultimately the painting is a record of a constructed reality where the manipulations are visible to the viewer. ‘The layers of alteration, de-contextualisation and re-contextualisation do not end with the works on display in this exhibition. The objects were originally three dimensional, then they are photographs, then the photographs are printed and manipulated as objects, then photographed again as the source material for works. The painted images are then inserted into or combined with found objects and again become three dimensional. A metamorphic continuum is thus created that is perpetuated by visitors to the exhibition who might take further photographs and display them elsewhere on their mobile phones.’ For -arium, Van Schalkwyk collaborated with Gustaf Templehof (digital visual effects), Allen Laing (sculptor) and Constance van Loggerenberg (jeweller).