Tony Jackman’s foodSTUFF: Reflections & recipes from a celebrated foodie is a beautifully produced collection of recipes punctuated with memories, reflections and witty essays. Creative Feel spoke to the maverick food writer about his refreshingly original take on life and food. 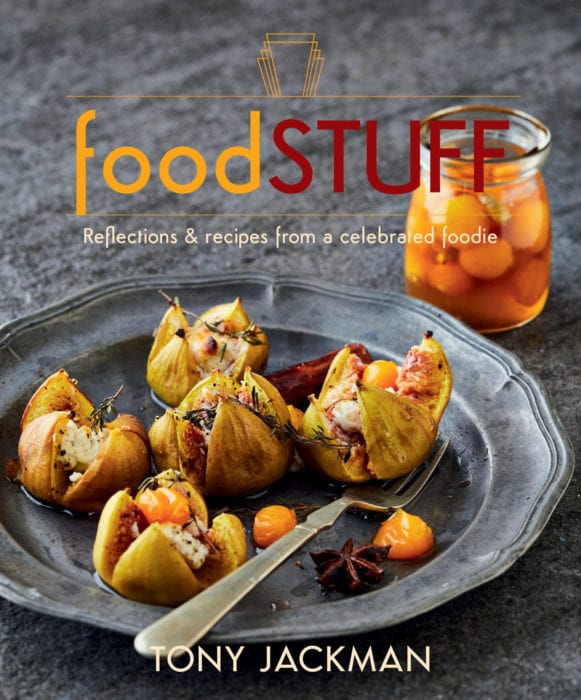 Tony Jackman is a journalist, columnist, playwright and occasional restaurateur. The son of British expatriates who sought a life under the sun, he grew up far from the Yorkshire moors that are the home turf of his cousins. Yet his ‘Yorkshirenessa’ remains a part of his make-up, his stoic outlook on life and his sense of getting on with things despite the odds. An accomplished truant while at (or not at) high school, he elbowed his way into journalism despite closed doors and, over decades, moulded himself into the writer he wanted to become. Unable to afford university, he decided to find an education by watching, listening and observing everyone and everything from which he could glean knowledge and understanding. Jackman is chief sub-editor of Daily Maverick, to which he also contributes columns. The cookbook as memoir, or memoir as cookbook? ‘It started off as a book of essays with recipes and then my publisher Annake Müller said to me, “I want that when people have read your book that they think they know Tony Jackman.” I didn’t see that coming, but that gave me a brief, and I went back and wrote a whole lot more. And that’s really the first part of the book now.’

It started off as a book of essays with recipes

While the recipes all look delicious, and are easy to follow, it is Jackman’s writing that really brings the book to life. His reflections ‘on the now and beyond’ are peppered with wit and humour as he wonders ‘what the Gods eat’ or ‘which dark-hearted Hollywood screenwriter decided to write cream out of our diets’, and dedicates an entire chapter to the ‘misunderstood’ parsnip. He manages to introduce politics in a way that is enjoyable to read too, and throws in the occasional Bob Dylan reference. Before the essays, though, come memories. Some are rich and warm. Memories of childhood and growing up. Of life in Oranjemund, Namibia, and then Cape Town. But as is life, there are also tough memories, the heartbreaking loss of family members in particular, that Jackman doesn’t gloss over. Though some chapters were obviously emotionally taxing to write, he finds balance. Jackman describes his recipes as ‘quite wholesome and homely, sort of the real and with lots of flavour, lots of herbs, lots of spices. It’s what I cook at home, it’s what I cook for my family and for friends, it whats I cooked in two restaurants. It’s things that i want to eat; and need to eat.’ And of course, lots of lamb.

‘The lamb shank with oregano, thyme and lemon juice is, I suppose, the signature dish. As is the spanspek soup, those are pretty much my signatures. Lamb is my thing. Lamb is to me like a pizza restaurant specialises in pizza and a fish restaurant specialises in fish.’ When Jackman was a restaurateur in Sutherland, one of his favourite daily rituals was planning his menu, often lamb-centred, and then writing it on the blackboard that was attached to the wall outside. ‘I’d go and I’d clean the blackboard and I’d write up “karoo lamb pie, lamb shank with whatever”. Then one day, I was doing that and I was writing all these names of these dishes and I felt like I was being watched and I carried on and I thought… and I looked and across the road was this double-decker, double-length sheep truck, full of these sheep just staring at me, and I said sorry, I went inside and waited until the truck left.’ foodSTUFF is a feast for the eyes, mind and, of course, tastebuds. 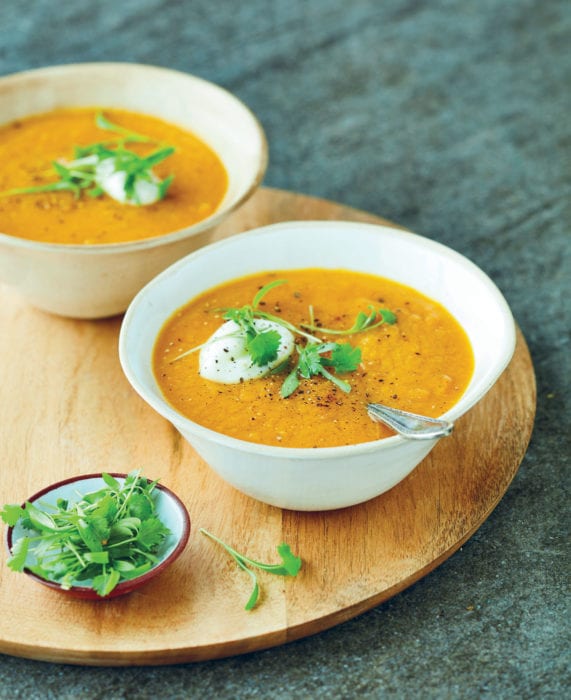 This is a maverick dish, a fruit turned into a savoury starter. I love a maverick, and I love dishes that get out there and dare to be a little different. This was on my restaurant menu at Schreiner’a Bistro, and my favourite Karoo person in the world, Sandra Antrobus of the wonderful Victoria Manor and Tuishuise in Cradock, loved it so much that she wanted the recipe. This one’s for you, ma’am. Sweat the onions and grated ginger on a moderate heat until soft and the onions are translucent, then add chunks of a whole spanspek, and simmer, stirring continuously. Add the zest and juice of the orange, the cinnamon stick, cardamom pods, and sprinkle on the 2 Tbs of masala. I used a wet mix we bought in KZN. Add the vegetable stock, bring to a gentle bubble and allow to simmer for 10 minutes. I find that it does not need seasoning, but taste and add salt and pepper if you prefer. Remove the whole seeds and cinnamon stick before blending. Blend thoroughly and stir in the 1 cup (250 ml) yoghurt. Serve with a swirl of plain yoghurt, garnished with coriander leaves.