Three outstanding young musicians founded the ensemble Trio NeuKlang (‘New Sound’) in 1998 and they will now be performing for the first time in South Africa during RMB Starlight Classics on 9 September and at the Linder Auditorium on 16 September.

Right from the beginning, Trio NeuKlang set themselves the objective of bringing a different musical experience to the concert hall, linking familiar music with new sounds and bringing with it a renewed sense of excitement. To achieve this objective, Trio NeuKlang works with well-known contemporary composers but arrange the compositions themselves. Nikolaj Abramson (clarinet), who was born in Moscow and acts as guest soloist with several orchestras and ensembles, is a sought-after arranger for radio and television. Arthur Hornig (violoncello) is the principal cellist of the orchestra of the Deutsche Oper Berlin and Jan Jachmann (concert accordion) focuses his musical creativity in collaborating with contemporary composers, including Georg Katzer, Jeffrey Ching, Klaus Lang and Il-Ryun Chung. In recognition of its musical work, the Trio has won numerous awards, including the Artist Grant from the city of Berlin, the Brandenburg Chamber Music Award from Banzendorf and the Ensemble Prize of the city of Moers. Two of their popular concert programmes include Lost in Tango and Goodbye Astor, both in the Tango tradition. Trio NeuKlang also performs works of the classical composers. For this part of their repertoire, they have received excellent reviews and enthusiastic praise from their audiences. Trio NeuKlang has successfully performed at numerous festivals, including the International Ludwigsburg Castle Festival and the Schleswig-Holstein Musik Festival. 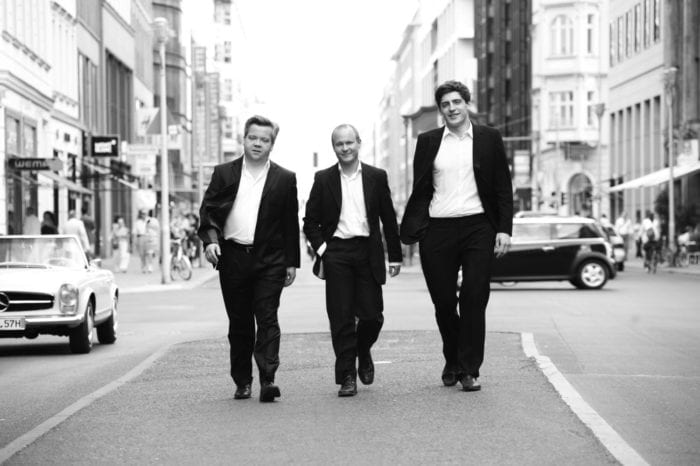 The three gentlemen listed above are unfortunately not the most skilled of writers. Aware of their shortcomings, they decided to let a charming, as well as eloquent, journalist describe their trio. The text that resulted, was adorned with phrases such as:

The unique instrumentation creates a versatile sound that alternates between the precision of chamber music and the breadth of a symphony orchestra. 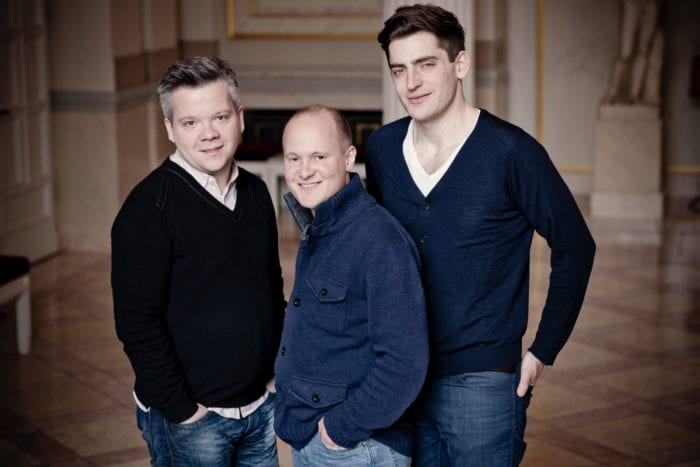 Not that this isn’t true, but these compliments made the three musicians blush to such an extent that they decided they would rather write the text themselves. However, they realized that their world of music – in which Mozart’s Eine Kleine Nachtmusik sounds like a tango, Beethoven’s symphonies become jazz standards and contemporary music appears well-tempered – is better described through their music than with words. By founding this new trio the three musicians have set themselves the objective of bringing a different musical experience to the concert hall, linking familiar music with new sounds and bringing with it a renewed sense of excitement. To achieve this objective, they work with well-known contemporary composers and arrange their compositions themselves. As a reward for its musical work, the Trio has been recognised with numerous awards. Included in the awards are the Artist Grant from the city of Berlin, the Brandenburg Chamber Music Award from Banzendorf and the Ensemble Prize of the city of Moers.  Two most recent concert programs were “Lost in tango” and “Goodbye Astor” in the Tango tradition. The trio also performs works of the classical composers. For this part of their repertoire, they received excellent press reviews and enthusiastic praise from their audiences. The trio has successfully performed at numerous festivals, including the International Ludwigsburg Castle Festival and the Schleswig-Holstein Music Festival. 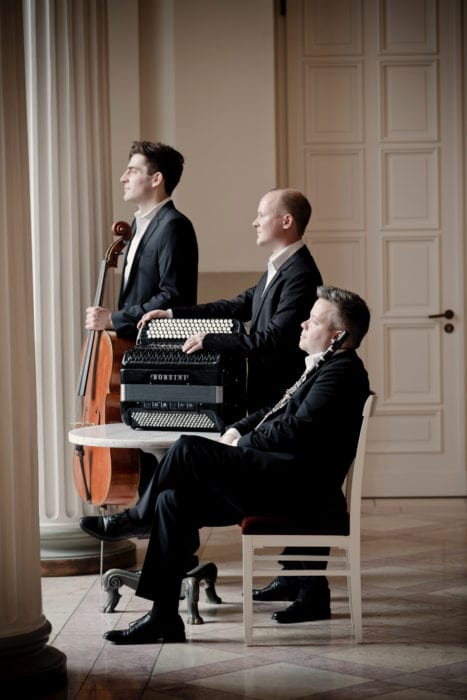 The new album from Trio NeuKlang sounds as if the great composers of classical music met Astor Piazzolla in the old Berlin Funkhaus broadcasting centre to record an album together. In reality, this musical encounter was arranged by Trio NeuKlang – the CD features famous works from European classical music played in a unique style influenced by tango and jazz. With their arrangements, the trio demonstrates that Vivaldi’s “The Four Seasons” was, in reality, inspired by Astor Piazzolla, that Rossini’s “The Barber of Seville” cut Ludwig van Beethoven’s hair on the side and that jazz concerts took place in Edvard Grieg’s “Hall of the Mountain King”. “Goodbye Astor” is both a declaration of love to tango as well as a tribute to classical music.

Listen to the audio clips from their CD “Good bye Astor” here: http://www.trio-neuklang.de/english/audio/ 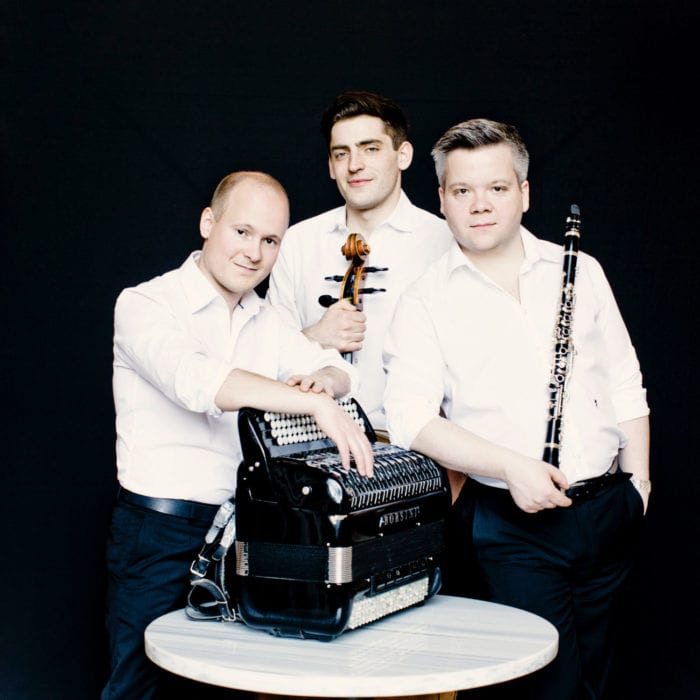 Tickets available at Computicket or online at http://online.computicket.com/web/

*Please note that tickets for pensioners, students, learners and UFS staff can only be purchased at a Computicket outlet (Shoprite Checkers) or at the doors since a valid card or ID has to be presented to qualify for the above-mentioned discount. 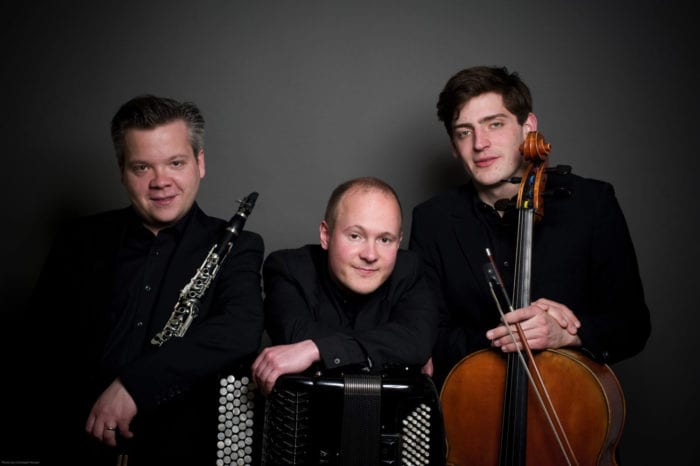 More information on the artists of Trio NeuKlang

Nikolaj Abramson was born in Moscow, where from 1988 he took clarinet lessons at the Gnesina-Institute with Prof Volkow. Since 1991 he has continued his studies with Prof D. Kühn in Berlin first at the Christian Philipp Emanuell Bach-Gymnasium and since 1995 at the Hanns Eisler Academy of Music, where he graduated in 2000 with the highest marks. He continued his studies with a masters degree and an additional degree in pedagogy. He was awarded the 1st prize at the Hanns Eisler – Competition for Contemporary Music both in 1997 and 1998 Throughout his musical career he has recorded several CD and radio recordings and participated in national and international festivals. He acts as guest soloist with several orchestras and ensembles and is a sought-after arranger for radio and television. 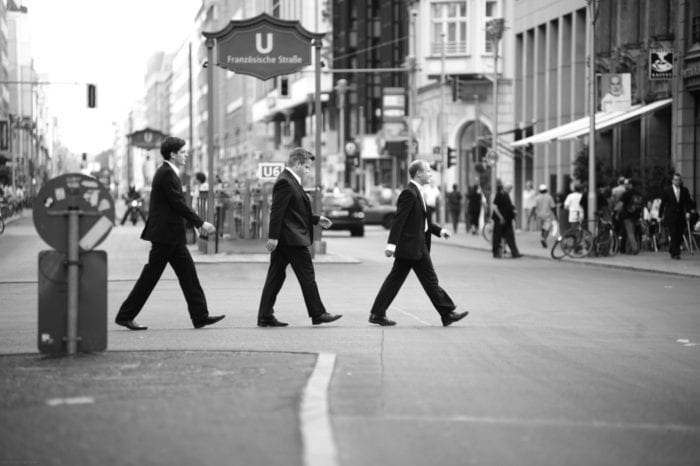 Arthur Hornig (principal cellist of the orchestra of the Deutsche Oper Berlin) was born in 1987 and received his first cello lessons with Prof. Eldar Issakadse. As early as 1997 he became a young student at the Berlin Music Academies. From 2006 he studied in the cello class of Prof Michael Sanderling at the University of Music and Performing Arts in Frankfurt am Main. Arthur Hornig has often performed on Jugend musiziert competitions and where he won first prizes, including first federal awards and the Special Prize for Contemporary Music. In 2002 he won a special prize at the International Cello Competition Antonio Janigro in Croatia. In 2003 Arthur Hornig took first prize at the German Railways Music Competition (Berlin). He was the finalist and 2010 scholarship winner of the German Music Competition in the violoncello solo category and has added to his achievements in the Federal Selection “Concerts Artists 2011”. Since 2009 Arthur Hornig has been a scholar of the Foundation of the German People. He has also been promoted by the Yehudi Menuhin Organisation “Live Music Now”. With the string trio, Trio Lieto (Elena Graf – violin and Peijun Xu – Viola), he was prizewinner at the European Chamber Music Competition, Karlsruhe and at the Chamber Music Competition of the Polytechnic Society (Frankfurt).

With this ensemble he studied among others with the renowned Artemis Quartet in Berlin. He is also a member of the Trio Neuklang which has been awarded the highest prizes at various competitions. As a soloist Arthur Hornig has played with many orchestras in Germany and abroad. These include the Berlin Radio Symphony Orchestra, the Beethoven Orchestra (Bonn), the orchestra of the State Theatre (Giessen), the Jena Philharmonic, and the West Bohemian Symphony Orchestra (Marienbad). Concert tours as a soloist and chamber musician have taken him throughout Europe, Japan and China as well as repeated visits to Brazil. He has participated in various international masterclasses including with Gary Hoffman, Wolfgang Emanuel Schmidt, Johannes Moser, Marcio Carneiro and the Fauré Quartet. In addition, Arthur Hornig is particularly involved in the performance of contemporary music. He has performed in more than 30 world premieres in recent years. Since the 2011 – 2012 season Arthur Hornig has been the principal cellist of the orchestra of the Deutsche Oper Berlin. 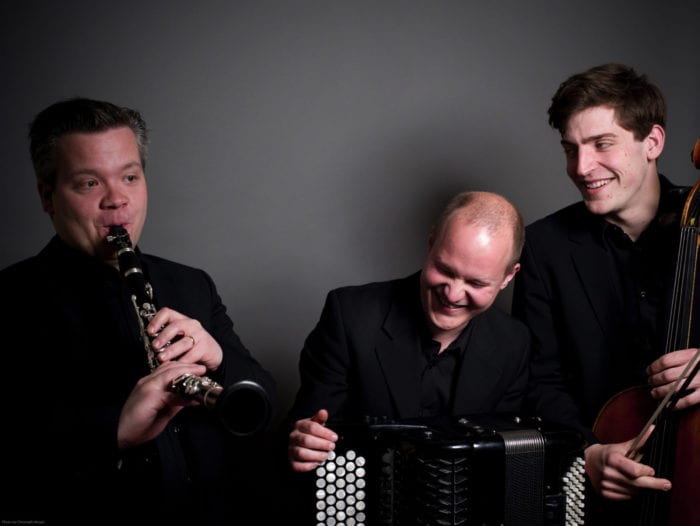 Jan Jachmann, born in 1982 in Berlin, received his first accordion lessons with Gerhard Scherer and studied with Margit Kern in Lübeck and Bremen. He won several first prizes in the national competition Jugend Musiziert and a scholarship from the Jeunesses Musicales Germany and the State of Berlin. He performs solo and chamber music work, with the Kaprizma Ensemble Jerusalem, the German Chamber Orchestra Berlin and the Potsdam Chamber Academy. His work with the Trio Neuklang has earned him numerous awards. One focus of his musical creativity is collaborations with contemporary composers including Georg Katzer, Jeffrey Ching, Klaus Lang and Il – Ryun Chung, performed on several CD recordings.