How much do we demand of performers?

This is a question I’ve often thought about, but a month or so back, when timelines and front pages and magazine covers were awash with the news of South African mbaqanga pioneer Ray Phiri’s death, it held more weight than usual. Ray Phiri, while being best known for his music, his career, and his charisma, will always be remembered, above all else, as a performer. Videos, photographs, and vibrant pieces of writing have documented this many times over. There is an image by the photographer Niamh Walsh-Vorster that I love. It was taken at Durban’s 2017 Zakifo Music Festival, just a few weeks before Phiri left the world. In the image, there is light and smoke and a series of sharp, yellow spotlights cutting through the frame. At the bottom right-hand corner is Phiri, hunched over and turned away from the mic. His one hand is hovering above the other and he wears a look on his face that seems to ride a line between passion and weariness. It is a beautiful image and in retrospect, perhaps it is a telling one. Then there is a piece of writing by long-form, freelance journalist Kimon De Greef about a particularly memorable Ray Phiri show at the 2015 National Arts Festival. The piece, as heart-wrenching as it is captivating, is titled ‘Phiri on Demand’ and takes the form of a review detailing Phiri’s performance just days after the musician had broken three ribs, but took to the stage regardless. Here’s a taster:

‘Around three songs in, Phiri tells us about his injury, lifting his shirt to reveal swathes of bandages. “I wouldn’t wish this pain on anybody,” he says. “If you’re a smart Alec, or a smart Alice, you might take a picture, record tonight. Maybe this old man trapped inside a young man’s body is giving you a message. Maybe he’s just a visitor. Maybe he won’t be around for much longer, you know.” In tears, Phiri leaves the stage, and his band, looking deeply anxious, plays through the remainder of a smooth jazz song. There is a terrible tension in the room. Nobody knows if Phiri is coming back.’ Later, de Greef details the rest of Phiri’s performance, which was carried out before a shocked but entertained audience. It is a difficult read but it captures, brutally, the insatiable relationship between performer and audience. Phiri is gone now, but his memory lives on through his countless performances, both the inspiring and the concerning ones. But this is not a piece about Ray Phiri. This is a piece about how much we really ask of performers, how much we demand from them and in turn, how far they’ll go to respond to our calls for more, more, more.

This is a piece about how much we really ask of performers, how much we demand from them and in turn, how far they’ll go to respond to our calls for more, more, more

To look at the relationship from a financial perspective, it hardly seems equal. Most performers struggle to fill up a venue these days and even if they do, most of the cover charge goes to the venue itself. From a more corporeal perspective, it makes little sense too. Most performers spend a large part of their careers just trying to get to the point where people will pay good money to see them, and those performers who do make it big are subsequently so overbooked and over-toured that they hardly have the energy to put on a performance. It’s a nasty and complex give-and-take and maybe I’m just looking at it a bit too cynically, but it doesn’t seem too healthy. Perhaps it has always been this way. I haven’t been around long enough to say, but I have been to a fair amount of shows in my lifetime and to me, at least, it has always been this way. 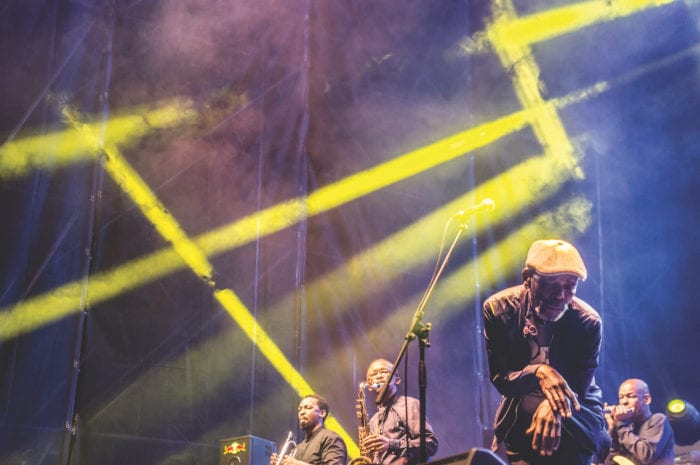 I think I first noticed it in the local punk scene. I remember going to see a show at Cape Town’s Wynberg Sports Club. This was where all the scraggly punks and slick-haired scene kids would go to see whichever new act was brave enough to take the stage. There was this one band (I forget their name now) that was brand new to the scene. About three songs in, though, the crowd just couldn’t get enough. They were a wild, noisy, fierce act to witness and despite the sweat and the gradual lumbering around on stage, they played with a seemingly inexhaustible energy. Towards the end of their show, the bassist swung his instrument around in a swift and sudden motion, hitting the vocalist in the centre of his forehead. Blood came streaming out his face and this, strangely enough, drove the crowd into nothing short of a frenzy. The vocalist, a good crowd-reader, saw this and chose to play on, despite his slow loss of blood and his now jelly-like legs. Drumsticks counted down the intro and the band launched into their next song. Now looking a shade paler than when he had first stepped onto the stage, the vocalist began to howl into the microphone in a way that I can only liken to the sound a wounded and dying animal makes. It was an unsettling thing to witness, made more unsettling by the crowd around me who continued to scream for more. I didn’t stick around to see how the show ended. At one stadium-sized show I attended, the lead singer of a well-known international band was speaking to the crowd about his experience of travelling to South Africa for the first time when someone pelted him with a full can of beer for no good reason.

Is it because we deify performers to a degree? And in turn, poke and prod at them to see if they really are capable of getting angry or failing, or simply reacting? Or maybe this strange dynamic lies in the fact that most often when we are seeing a show, we have paid money to see that show and as a result, we want to get the absolute most out of that transaction, even if it is to the detriment of the performer

At another, smaller show, I remember how the guitarist of a locally famous indie band kept having to move to the corner of the stage because someone in the front row grabbed his leg each time he moved forward. Eventually, he left the stage completely and the whole set was cut short. There are many stories like this, some of them funny, some of them bizarre, some of them a little unsettling. Is it because we deify performers to a degree? And in turn, poke and prod at them to see if they really are capable of getting angry or failing, or simply reacting? Or maybe this strange dynamic lies in the fact that most often when we are seeing a show, we have paid money to see that show and as a result, we want to get the absolute most out of that transaction, even if it is to the detriment of the performer. And, look – maybe. But it could also be that all of these instances simply serve as an example of what a room full of people under the influence of too much alcohol is capable of. Either way, it can’t be a very beneficial relationship for the performer or the audience member. Perhaps it’s this element of performance that makes it so wonderful to experience – the ability of a live, human performance to reveal all of these wonderful, awful human contradictions and actions. So whether you’re in the middle of a sweaty, bloody punk show, or you’re standing front row at a concert by a musical legend, you’re still a part of some collective experience filled with euphoria and excitement and pain and anger and all of these very human things. And as bizarre as this performer-audience dynamic may be, if that’s the single thing that keeps it sustainable – that shared human element – then perhaps that’ll do for now.