Now in its twenty-third year, OppiKoppi has announced it is here to stay. Ranked the fourth best music festival in the world, this October will see the festival continue to do its part to change the country and bring people together in a spontaneous and natural way.

The theme for this year, ‘Me Now, the Mango Picker’ is inspired by a strangely beautiful tune by Carlo Mombelli, bass jazz maestro who many people claim is one of the world’s finest. ‘The name comes from a Carlo Mombelli song, “Me, the Mango picker”,’ say festival organisers. ‘We decided to update it by adding “NOW”, making it present and in a way, a bit persistent. “The song was born when I was living in Germany in the 1990s, teaching at the conservatory in Munich. My wife and I missed home and wanted to get back and finally, I felt that the mangoes were ripe and Me, the Mango Picker needed to go home to taste them. That we did in 1998 and it was the best thing we ever did. It’s just a simple song but somehow it has now been recorded in New York, in Belgium, and last year someone in Paris recorded it and at the 2015 Montreux Fest Jazz Academy, they picked that song to workshop together with Al Jarreau. So basically, it’s a positive song about tasting the fruits of South Africa and the beautiful place we live in!”’ In keeping with the the gruff rock inspired festival’s support for the fine arts, this year they chose an artwork by Banele Khoza. ‘A painting to launch a ship with. Or, of course, a sun-drenched rock festival’. OppiKoppi is the biggest multiple-day music festival held in the Limpopo Province of South Africa, near the mining town of Northam. 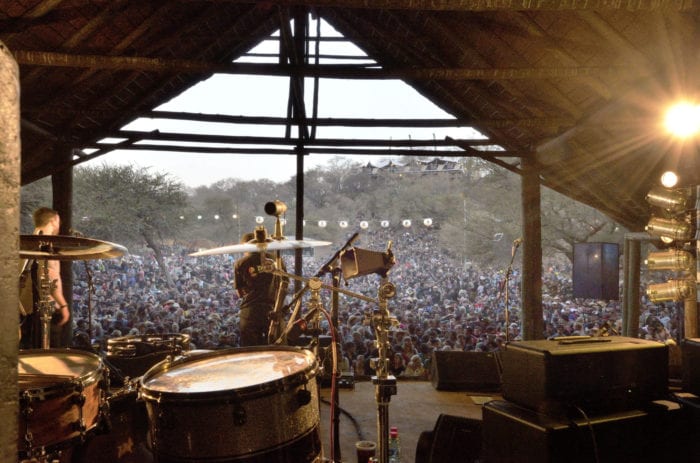 The first ever band weekend at the OppiKoppi farm took place in May 1994 with Valiant Swart, Koos Kombuis and few hundred people in the small bar. It has since grown substantially, with the addition of many new stages and thousands of people turning up each year. The festival is regarded by some as the primary influence in jump-starting the South African rock music movement in the late 1990s. Thousands of people still flock to the farm to camp out in the bush and enjoy simultaneous performances on seven stages. Although the festival started off focusing mostly on rock music, more genres were soon added and now plays host to roughly 160 sets of international and South African music and entertainment acts of all genres including rock, hip hop, hardcore, punk, ska, folk, blues, drum ‘n bass, big beats, kwaito, jazz, funk, traditional, world music, comedy, metal, indie, house and other genres. ‘South Africa’s only festival with a heritage site’ takes place on 5, 6 and 7 October this year. General Admission to the three-day festival is only R930. ‘General Admission’ is a dated term. Like cardigans and beards and many more. There it is again. This rock-bottom ticket price includes 24 hour camping on Thursday, Friday and Saturday. Tented hotel accommodation, from smart to super outrageous, is also available and ranges from R1000 to R3400 per person depending on your fondness for luxury. Or the lap thereof. Plus! Included in your bargain ticket are well over 150 live performances by countless (we’ve tried) artists, bands, DJ’s, actors, comedians, chefs and other crew members from all over our amazing universe.