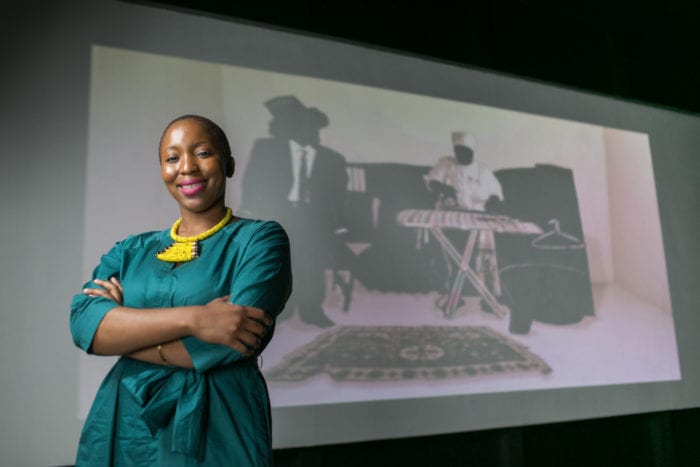 Where does your passion for art come from?

I actually started out writing poetry and doing storytelling, and then I was introduced to theatre when I was in high school. It was never my intention to pursue visual arts as  I was interested in a career in literature –  specifically African literature or journalism. Then I saw a photograph taken during the Sudan war when there was a famine, by photojournalist Kevin Carter from the Bang Bang Club. It depicts a girl crouched on the ground, with a vulture waiting for the child to die of starvation. This was my introduction to photography and when I finished high school, I went to study photography at the Market Photo Workshop. I had a strong desire to incorporate my interest in literature and performance into my photography practice.

Briefly describe your artistic journey up until the point of entering Sasol New Signatures?

I was the recipient of the Tierney Fellowship Award in 2012, leading to my non-commercial exhibition Ke Lefa Laka. This exhibition was also shown in a group exhibition in New York, which inspired me to study Fine Art at the University of Johannesburg (I completed my degree in 2016). I created an animation entitled Pied Piper’s Voyage, which was launched on Mandela Day 2014 in Scotland, and I was then selected as the featured artist for the 17th Business and Arts South Africa Awards in 2014. I was also awarded the Jury Prize at the Bamako Encounters Biennale of African Photography in 2015. Over the past six years I have participated in photography master classes and exhibitions locally and internationally. My photography work forms part of several private and public collections, most notably the Carnegie Museum of Art in Pennsylvania.

What motivated you to enter the Sasol New Signatures art competition?

As an artist I respect Nelmarie du Preez, who won the Sasol New Signatures two years ago. It is evident how her practice has grown and how the competition enabled that.

What excites you about the creative process?

I create fictional narratives, which enact stories about my family. Here I take on different personas and stage scenes composed of photo-montages on life-size cardboards or silhouettes. My interest in memory and history is also about being at the same place at different times and not meeting. Therefore, I construct a visual narrative, in which we meet. The history of South Africa is a prominent theme in my work, my work is evidence of the political in the personal – thus personal narratives resonate with larger political and social issues and the project makes evident these intersections via an interrogation of intimate narratives.

Tell us about your preferred medium/s …and why?

My preferred mediums are photography and video art. Photographs present not just with the “there-ness” of the object but its “having-been-there”, thus having the ability to present a past, a present and future in a single image.  Roland Barthes argues that these are the modern way in which we experience the reality of loss and ultimately death. My approach of working in both photography and film is through personal archives, which raises more questions than they are able to answer and the histories that have been written out and excluded, through the archival reconfiguration.

If you could summarise your work in three independent words, what would it be?

Did this competition teach you anything about yourself?

The work I created for the competition, allowed me to realise that family albums are a significant part of family histories. Photographs are more than documentation of personal narratives –  they become prized possessions, harking back to a certain event, a certain person, and a particular time. Family photographs are more than just a memory of moments or people who have passed on, or re- assurance of an existence, but that they are also vehicles of fantasy that allow for a momentary space to ‘perform’ ideals of ‘family-ness’, and become visual constructions of who we think we are and hope to be, yet at the same time being an erasure of reality. I realised how the family album is composed of a selection of what shall be remembered, what forgotten, therefore our histories become orchestrated fictions, imagined histories.

Which local artists do you admire?

What are you currently working on/What is next for you as an artist?

I have just worked on a new photographic series Reconstruction of a family (2016) which focuses on how the image is never ‘complete’, we are only presented with visual clues that allow our own imaginaries to further ‘complete’ the story. The work reveals that memories do not reveal easy answers.  For me it reveals that time can break apart and reconnect and not fit back into one another. This work also inspired a new stop frame animation film, Ke sale teng (2017), which I submitted for this year’s Sasol New Signatures, forming part of the exhibition at the Pretoria Arts Museum. I am looking forward to completing my new work, which moves further from photography and continues to incorporate animation, performance and sculptural elements.

What impact would winning this competition have on you?

It would give me the opportunity to hold a solo exhibition in a museum and have the support to work on a new body of work over the next year. This would take my practice and career to a new level.