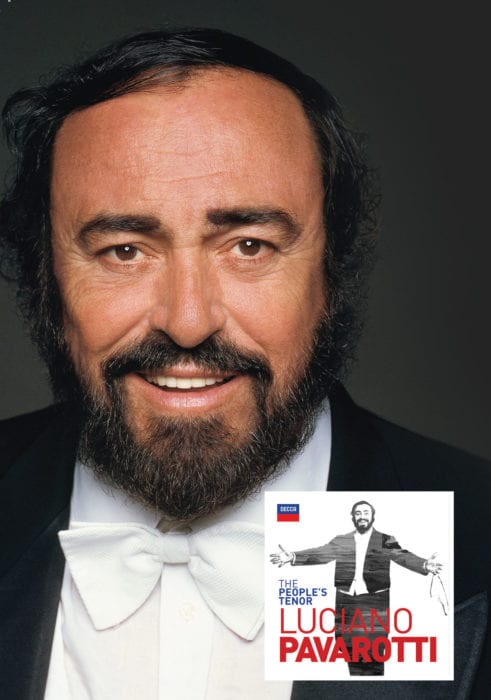 To commemorate ten years since Luciano Pavarotti’s death on 6 September 2007, Decca has released a collection of his best songs, a documentary on his life is in the works, and Fondazione Luciano Pavarotti and Friends & Partners, with support from Universal Music Group (UMG), have announced a special tribute concert dedicated to the celebrated late tenor, with part of the proceeds going to charity. Luciano Pavarotti was born in Italy in 1935, made his professional debut in 1961 and gave his last concert the year before he died in 2006 at the Winter Olympic Games in Turin, Italy. A tremendous talent who managed to create drama on and off stage and seemed to always be driven by his love of music and humanity. Celebrating the extraordinary recorded legacy of the world’s greatest tenor, Decca presents a snapshot of his best-loved recordings in their latest release: Luciano Pavarotti: The People’s Tenor. The two CDs will present Pavarotti’s most iconic and endearing moments: his 25 best opera moments and 25 best Neapolitan songs. Three hours of all your favourite highlights from an incredible recording career. This is Pavarotti as we best remember him: the voice that defined so many operatic roles in commanding and critically acclaimed performances, as well as the great storyteller in popular Neapolitan songs such as ‘Funiculì, funiculà’, ‘ ‘O sole mio’ and ‘Turno Surriento’.

It promises to be a tour de force celebrating the 20th century’s greatest tenor.

Experience the sheer emotional range of his voice in Bizet’s ‘La fleur que tu m’avais jetée’, its intelligence, delicacy and splendour in critically-acclaimed performances from La Bohème with Karajan and an unmatched ‘Ingemisco’ from Verdi’s Requiem with Sir Georg Solti. All your favourite highlights from an incredible recording career. The biggest operatic hits, including his trademark ‘Nessun Dorma’ plus selected highlights from the best-selling classical record of all time, The Original Three Tenors Concert. On 6 September 2017, to mark the tenth anniversary of Luciano Pavarotti’s death, Fondazione Luciano Pavarotti will host an event at the Arena in Verona in his honour. Opera stars confirmed for the event are Plácido Domingo and Josè Carreras, who with Pavarotti won legions of fans the world over as The Three Tenors, bringing new audiences to opera and changing the public perception of opera as an art form. A host of opera and pop stars will join Domingo and Carreras. Award-winning film director Ron Howard will begin working on a major documentary about the opera superstar, ‘I didn’t know that much about opera, but always found Pavarotti a charismatic figure, whom I’d met in the 1980s. Like with many people, he was my introduction to opera as something that was accessible, moving and emotional. Probably the only opera albums I bought were by Pavarotti.’ It promises to be a tour de force celebrating the 20th century’s greatest tenor.