The theatre fraternity in and beyond South Africa was saddened tonight to hear the news of the passing of award-winning local theatre practitioner Themi Venturas. 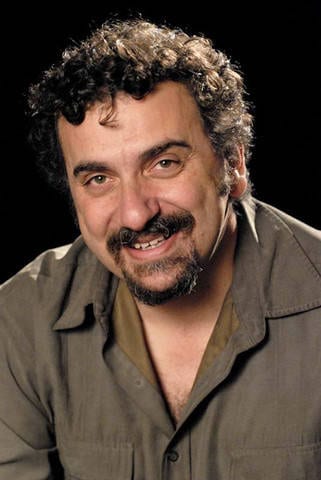 Venturas, an actor, director and a mentor to many, died at 20:00 on 11 September 2017, after a battle with pancreatic cancer. He leaves his wife, Trish, who is the principal of the Patricia McIntosh School of Ballet in Durban, and their sons Matthew and Alexander. Facebook was flooded with messages of condolences as soon as Durban theatre personality Caroline Smart posted news of Themi’s passing not long after he had been taken for care to a hospice. On Saturday night, Smart had mentioned on Facebook how delighted she was to see Venturas – very thin, pale, and with an oxygen mask in a wheelchair – attending the opening night performance of the Young Performers’ revival of the musical Footloose, at Durban’s Elizabeth Sneddon Theatre. The show was first directed by Venturas in 2014 and he was supervising director to Daisy Spencer for its revival. It was the last production he saw in a theatre he loved. Earlier this year, the theatre community rallied to raise funds for Venturas’s escalating medical costs, a move initiated by fund campaign manager Jackie Cunniffe, of the Elizabeth Sneddon Theatre. Funds were required as Themi’s medical aid did not cover the new chemotherapy drug that could help extend his life by years. The cost of this treatment, on an ongoing basis, was extensive.

Much of Venturas’s theatre creativity centred on Durban’s Elizabeth Sneddon Theatre at the University of KwaZulu-Natal, where, in 1984, he was employed by the then-University of Natal as the head of productions and theatre manager. During this time, many young performers were set on the path to working professionally in the industry, including Thabo Mnguni, Tiki Nxumalo, Bongani “Pillay” Ngwenya, Mthunzi Namba and James Ngcobo (the award-winning stage and TV star who is now artistic director of Gauteng’s Market Theatre). Six years of teaching and management at the Elizabeth Sneddon Theatre saw the establishment of the EST Theatre Company, which saw Themi actively involved in creating work with many disadvantaged students throughout Durban. These included jazz musicians Lulu Gontsana, Zim Ngqawana, Feya Faku, Jerry Kunene, Brian Thusi, Concord Nkabinde, Johnny Mekoa, Victor Masondo and Andile Zwane and established theatre professionals Alfred, Patti and Tu Nokwe, Brenda Radloff, Celeste Litkie, Mark Faith, and many others. During this time Themi was also an active member and treasurer of the erstwhile Theatre Alliance of Natal (Tan) – an organisation created by the UDF and Cosatu to look after the underground interests of the disadvantaged theatre community, along with struggle colleagues Kessie Govender, Mi Hlatshwayo and Nise Malange.

Under the guidance of Tan, Themi applied for and became the community programme co-ordinator of the Natal Performing Arts Council (Napac), later to become The Playhouse Company. For four years he was instrumental in creating the Kwasa internship programme which, amongst other things, trained many of South Africa’s successful black performers. Among them were Thabani Ngubane (CEO of Ingonyama Productions), Nothando Mbanda (Mam Gobozi on Gagazi FM, now owner of Ishashalazi Productions) and Kenneth Kambule (he starred in the Oscar-nominated Yesterday). Others included Eric “Rasta” Hadebe, the late Collin Nhlumayo (writer of the play Skwiza), the late Lindani Ngwenya (presenter with Group Africa), Gugu Mzobe (who recently starred in Jimbo and Sophiatown), Hamish Kyd (playwright and performer), Mzwandile Kamaung (actor and opera singer) the late Thabani Tshanini (lead actor in the worldwide tour of Umabatha), Thami S’kosana (actor and director) and Tutu Goge (singer-actor in the New York production of The Lion King). In September of 1993, Themi took voluntary retrenchment from the Playhouse Company and started his own performing arts company, Themi Venturas Productions. At a time when most other theatre practitioners were leaving Durban for greener pastures he stayed and dedicated his career to the development of a performing arts industry in Durban.

He went out of his way to create products that employed local artists, and the lists of names of artists that have benefited from his tutelage reads like the who’s who of the Durban performing arts industry. As an artistic director, Themi was instrumental in the making of many of South Africa’s cultural exports – including the historic Zulu opera Princess Magogo Ka Dinuzulu, composed by Mzilkazi Khumalo from a book by Themba Msimang. It was adapted for stage by Venturas, and toured to the US, Norway and the Netherlands. More recently, Themi directed Ziyankomo and the Forbidden Fruit, composed by Phelelani Mnomiya from a book by Themba Msimang, and adapted for the opera stage by Themi. He also recently created the first gospel opera, The African Passion, that toured South Africa in 2013. Most recently he directed the world premiere of ’Mashu The Musical, written by Lucky Cele, which was performed to excellent reviews at the Playhouse in Durban. In the realm of corporate theatre, events and project management, Themi had vast local, national and international experience. He was widely regarded as one of the best in the business.

Amongst his many achievements in this arena, he included the ‘first’ opening of the Durban ICC; the Durban International Festival of Music in Africa which later evolved into the Awesome Africa Festival under the direction of Dan Chiorboli; and the Africa Peace Award ceremonies over the last 20 years, also at the ICC. Themi was also instrumental in the creation and management of the Durban International Blues Festival, and a variety of other music and festival events throughout South Africa. He founded the Catalina Theatre at Durban’s Wilson’s Wharf in December 2002 and temporarily saved Durban’s quaint Kwasuka Theatre from closing in early 2006. He also co-founded the Limelight Theatre in Umhlanga. In addition to numerous awards for acting and directing, both at home and abroad, he was awarded three lifetime achievement awards in the field of arts and culture –  namely: The Fools Award for Lifetime achievement, The Ariel Award for lifetime contribution to the Arts from the PESF, and the Durban Theatre Judges award for lifetime achievement.

As a member of the arts and culture community of KwaZulu-Natal, he had tirelessly worked in various civic organisations on a provincial, national and international level. He was the chairperson of the Dance and Theatre Network of KZN; the former national chairperson of Performing Arts Network of Southern Africa (Pansa), and the elected representative for KZN for the National Minister of Arts & Culture’s Task Team for Dance and Theatre. He was also an elected councillor for KZN of the 60-member General Council of the Cultural & Creative Industries Federation of South Africa (CCIFSA); President of the Alliance Francaişe de Durban; and a director of Keep the Dream 144 t/a Catalina UnLtd which is a performing arts production Company in South Africa that also runs the Catalina Theatre, Themi was a former trustee and then an ambassador of the Arts and Culture Trust of the President (ACT). He served as an arts and culture consultant to several international organisations and was the World Vice-Chair of the Arts and Culture Advisory Committee of the Athens Olympics 2004. He will be sorely missed and always remembered for the great good he did for the arts community in this country. Rest in peace, friend.