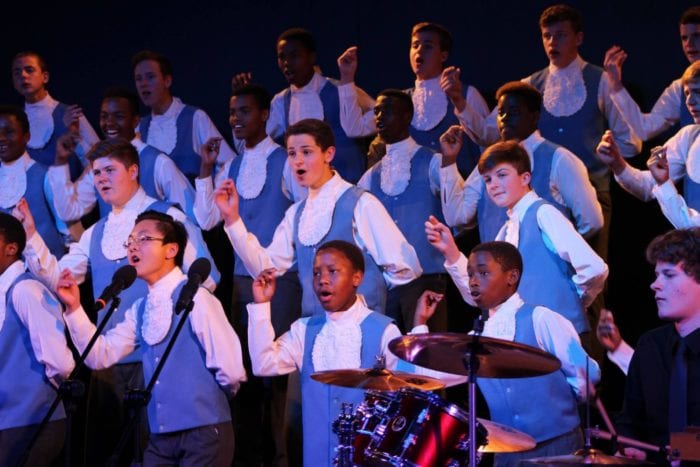 The world-famous Drakensberg Boys’ Choir is celebrating its fiftieth year in real style at their school in the beautiful Champagne Valley in the uKhahlamba-Drakensberg mountain range, a World Heritage Site.

The Drakensberg Boys’ Choir School had a humble beginning of 20 students when it was opened by John Tungay in 1967. Tungay, who was a choirmaster at the Trinity Congregational Church, approached his parents to take over their farm and turn it into a choir school. The goal was to create a multiracial, multicultural choir school that could rival the Vienna Boys’ Choir. Today the school boasts international acclaim and is widely regarded as one of the best boys’ choirs in the world. Extremely competitive auditions are held throughout South Africa annually, and the choir currently has an enrollment of about 100 boys, varying in age from 9 to 15. The boys don’t only sing and ﬁne-tune their musical talents but also get a ﬁrst-class academic education. Their acclaimed performances have taken them to the United States on numerous occasions, one of which saw them receiving a special award from Disney’s Magic Kingdom. The choir has performed in Canada, France, Germany, Greece, Hungary, Italy, Poland, Portugal, England, Finland, Switzerland, Turkey, and were even requested to sing for the Pope in the Vatican City. Additionally, they have toured Australia, various Asian countries and much of Africa, including Botswana, Egypt, Kenya, Malawi, Mozambique, Namibia, and Zimbabwe. The choir regularly perform concerts and music festivals featuring some of the country’s most popular artists in the school’s 600-seater auditorium, often filled to capacity. The first portion of each show is strictly reserved for classical music and features the works of greats such as Bach, Handel, Mozart and Beethoven. The second half of the performance almost always includes a hidden surprise or two – maybe jazz, folk music, or something by Freddie Mercury; a magnificent musical variety truly appreciated by enthusiasts.

If I thought the ﬁrst half of the concert was amazing, the second half has the audience on its feet, clapping, cheering, ululating, stamping 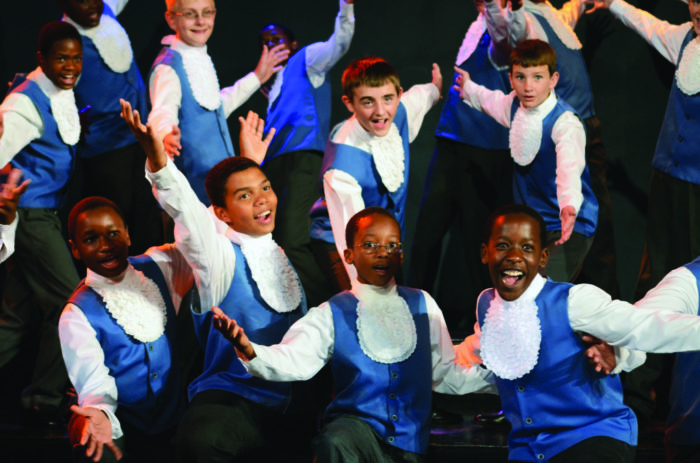 This is not simple music by any means, the boys take on complex melodies and difficult rhythms and are known for their excellence in performing music from a variety of genres. Kate Turkington describes her concert experience as such: ‘The lights dim, then go out. When they blaze on, there they are – dozens of boys in all shapes, sizes and colours, standing in tiers, truly representing our Rainbow Nation and ready to sing their hearts out. Award-winning director of music Johann van der Sandt raises his baton, and a cascade of pure young voices rings out “Glory to God” from Handel’s Messiah. It’s a breathtaking and emotive moment. ‘If I thought the ﬁrst half of the concert was amazing, the second half has the audience on its feet, clapping, cheering, ululating, stamping. The boys have abandoned their customary white shirts, grey trousers and blue waistcoats and are now in traditional dress. There’s a Zulu warrior; over there is a Basotho draped in blanket, conical straw hat on head. Here is an Afrikaner boy in scarf, felt hat and leather trousers; there a snappy dresser from a Cape Town township. ‘The range of costumes (and the boys obviously love wearing them) is as diverse as the music, because this is when the choir really goes back to its roots with a fabulous collection of South African folksongs, from lullabies and war cries, to songs of hope and even gumboot dancing.’ A visit to this remarkable choir is a must. If you’re a music lover, plan a visit in your itinerary. If you’re in KwaZulu-Natal at any stage, make it your mission to hear them – it’s an experience you will never forget.