It’s funny how such great and important parts of your life can sneak away from you so quietly. Then, upon returning, they do so with such a force that you can only stop and think: ‘Where the hell did you come from? And where did you go in the first place?’

I was in the Market Theatre a few weeks back for a non-theatre related event. I arrived there early in the morning when, outside of the Market Theatre, the Newtown commute was in full swing but inside, the building was wonderfully still. I took a walk around the building by myself, taking in the make of the place with all of its high ceilings, great, wooden doors, and its archival black and white framed prints of performances carried out in the years before I was even born. I was walking around like this for some time before I was struck by this strange and sudden sense of loss: As if I had dropped a part of my life somewhere, and only just now realised that it had been missing. It was an expansive, hollow sort of feeling that latched onto me with a great weight. It sounds a bit dramatic, I know, but I was at the theatre after all and what better place to allow these self-indulgent bouts of emotion? Anyway, it was in Joburg’s Market Theatre that I realised just how much I had been missing the theatre. It had been almost a year that I hadn’t properly sat down to enjoy a performance and I missed everything about it. I missed the quiet pressure of the stage before a show kicked off – that electric tension in the air – and the millions of individual conversations that took place amongst audience members as they walked out of the venue, piecing together what they had just seen. I missed the venues themselves and the many energies they carried inside of them.

Because as much as theatrical performance is an intrinsically human thing, the theatre space – the stages, the auditoriums, the front of house – is a story on its own

South African has a rich collection of theatre houses. To name a few, there is the small but elegant Fugard Theatre in the Cape Town CBD. Across town, there is the far younger Alexander Bar, which is home to some wonderfully intimate shows. The Baxter houses many a stage beneath its high ceilings and never fails to draw a crowd. In Joburg, there is the Market Theatre of course, which is home to many exciting new projects, and the iconic Joburg Theatre in the CBD. Durban boasts the jazz-centric BAT Centre as well as the Playhouse Theatre, and there are countless more theatrical venues scattered across the country. I mention places here rather than people, for a reason. Because as much as theatrical performance is an intrinsically human thing, the theatre space – the stages, the auditoriums, the front of house – is a story on its own. When I was in grade seven in primary school, we were expected to take on ‘roles of responsibility’. You could choose to be a hall monitor, a mentor to the younger students, a library assistant and other small roles. I formed part of the media team and so, along with four other students, it was my job to help ensure the morning assembly ran smoothly (lights, sound, setup) and that the school plays went off without a hitch (scene changes, sound cues, running orders). I loved this job. We were all 13 years old and didn’t quite know what we were doing, but it was fun to act like we did. I savoured the moments after the lights went down – the sweeping of the stage, the packing away of the podium and the projectors and the closing of those great, maroon curtains. There was a magic in those quiet moments that I could never quite grasp, but that I looked forward to each week. 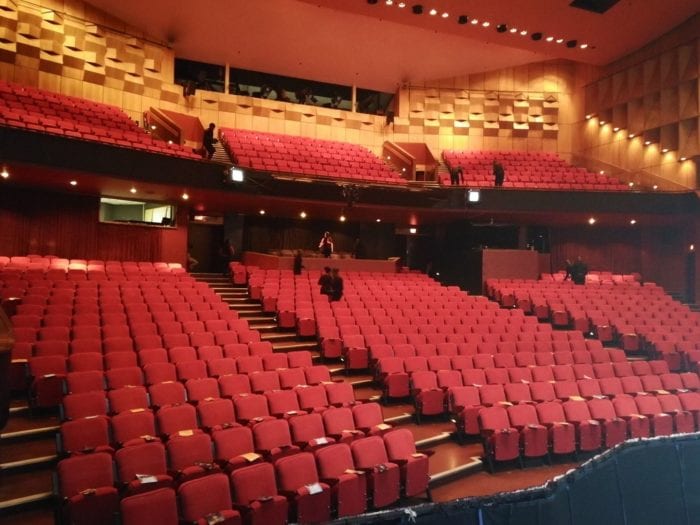 In high school, I began to attend the annual Shakespeare in the Park plays at the Maynardville Open Air Theatre in Cape Town. A friend’s mother first took us when I was about 15 and struggling to find the inspiration to get through those high school set works for English – The Merchant of Venice, Othello, A Midsummer Night’s Dream – all of those classroom gems we loved to hate. She thought that, upon seeing some of Shakespeare’s works off the page and on the stage, a number of things would fall into place for us. She was right, sort of. I still don’t have a great deal of passion for Shakespeare, but it was at the Maynardville Open Air Theatre that my love for staged performances began to solidify. The stage at Maynardville is a small and simple one, lined with a row of trees behind it which reach over the stage to form a sort of natural amphitheatre. Seating takes place on plastic chairs on the sloped lawn and quiet streams run their way along the outskirts of it all. In this way, almost anything you see on the Maynardville stage will be aesthetically striking.

But what is it about the theatre that we love so much? Is it the electric air in the room or the passion-filled conversations before the show? Is it the simple act of logging out and choosing instead, to sit in front of a show that is taking place right there and then, before our eyes?

By the time I left Cape Town to live and study in Grahamstown, I had an idea of wanting to write about the arts, but it was a fuzzy one. I fell in with the artsy crowds and began spending much of my time at the Rhodes University Theatre, hanging out with all the drama kids and listening to their many gripes about their classes and courses. It all fascinated me for some reason. I never wanted to do what they were doing, but I knew I wanted to be a part of what was going on there inside that old theatre complex. So I began writing about the shows. They were mostly student works and were all brimming with passion. I began writing on the performers and the directors too, spending many afternoons sitting in the rehearsal rooms and dusty theatres and talking about writing, directing and performing for the stage. When I attended my first National Arts Festival, I watched and wrote about more theatre than ever before. It was the first time I had experienced such a collective form of emotion, all channelled into performance. I loved how everyone seemed to run off the energy, moving from venue to venue, carrying it with them. Throughout the year too, the city would be alive with community theatre, student initiatives and more. There was always a show to attend, somewhere. Needless to say, by the time I left Grahamstown, I was head over heels for the theatre.

There was a magic in those quiet moments that I could never quite grasp, but that I looked forward to each week

But what is it about the theatre that we love so much? Is it the electric air in the room or the passion-filled conversations before the show? Is it the simple act of logging out and choosing instead, to sit in front of a show that is taking place right there and then, before our eyes? Maybe it’s the content of the shows we choose to see and how it resonates with us. It’s all of these things, of course, but it’s also our common understanding of what the theatre represents that makes it so magical. There’s a line by Maya Angelou that everyone loves to quote. It reads: ‘There is no greater agony than bearing an untold story inside you.’ The antithesis to such an agony, then, would be a supreme and euphoric sort of happiness – a great sense of calm. Whenever I’m in the theatre and the lights are low, I like to think that after all the stories that have been told on the stage – evident in the scuff marks, the used-up props, the dusty crevices of the wings – all that’s left is a supreme tranquillity. I’ve never had any great dreams to be on the theatre stage myself, but for some reason whenever I’m seated in front of one, there’s no place I’d rather be.