Earth formations and the impact of human economic activity on the terrestrial landscape are at the heart of Michele Mathison’s latest solo exhibition, States of Emergence, which took place at WHATIFTHEWORLD Gallery in Johannesburg recently.

The extraction and transportation of gigantic shards of stone, across borders between neighbouring countries, forms a narrative; one that obliquely references Michele Mathison’s countrymen and fellow sculptors. Although born in South Africa, the artist grew up in, and takes inspiration from, Zimbabwe with its rich history in stone sculpture. States of Emergence is both a formalist study in materiality and an exploration of what stone sculpture means in a commoditised world. The works on exhibition have begun their lives as pieces of rock destined for reconstruction into everyday objects: counters, gravestones, and pavements. But the contrary use by the artist of domestic stone as fragments of high art lends them gravitas. Mathison’s stone sculptures are a symbolic gesture in which he gives back to the earth that which has been taken away. The works on exhibition appear to be a radical departure from Mathison’s practice of casting iconic, utilitarian objects in concrete, ceramic and iron, then presenting them in a tableau that questions individual agency in basic acts of work. But these sculptures continue to be an extension of his examination into the inherent values of his chosen materials. In his earlier work, Mathison built geometric groups and visual fields. 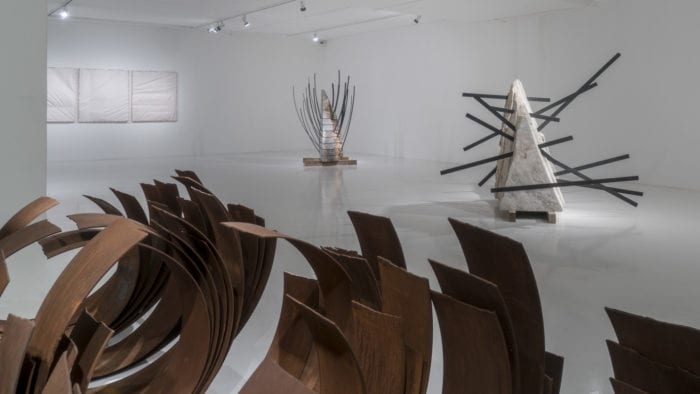 The work addresses a question around the intrusion into the earth’s surface, the use of mineral resources. It acknowledges that; at the same time, it creates opportunity and employment, and economy. So there’s a tension there, movement and friction within the pieces

Considering how an individual piece relates to the whole, his previous work created a narrative of the Southern African region’s collective concerns. Trade, and movement of people across borders, has caused tension between cultural cohesion and alienation of neighbouring nationals. In the exhibition States of Emergence, a similar enquiry happens as we consider the journey of quarried stone from Namibia, Zimbabwe and Rustenburg in the North West Province, to Johannesburg. The large abstract sculptures lead us into a dialogue about labour and the broader micro and macro economies around the processing of natural resources. Mathison’s recontextualisation of his salvaged raw material shifts the perception of value in common yet aesthetically cut surfaces whose quarrying, transportation and eventual discarding entreat us to look closer at the environmental impact of this commodity chain. The sculptures bear evidence of their quarrying, scars of the mechanical process of hewing them from the earth’s crust. 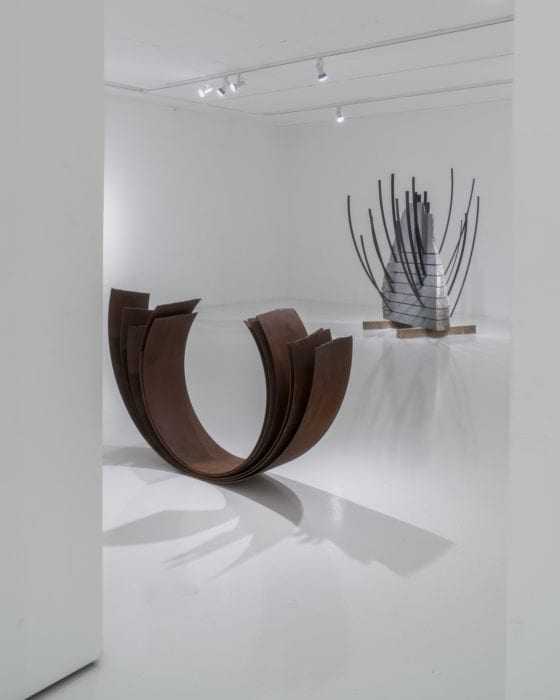 Two key works in the exhibition are Intrusion and Extrusion. The former is created from a Namibian marble called Palissandro, the latter from Rustenburg grey granite. In Intrusion, steel rods cut into the stone and, conversely, in Extrusion we find immense metal brackets jutting out of the stone. Combined, the works display a duality of energies in a grand metaphor for the opposing forces of industry and nature. Mathison says, ‘The work addresses a question around the intrusion into the earth’s surface, the use of mineral resources. It acknowledges that; at the same time, it creates opportunity and employment, and economy. So there’s a tension there, movement and friction within the pieces.’ Michele Mathison was born in South Africa in 1977 and was raised in Zimbabwe. Mathison has held solo exhibitions at WHATIFTHEWORLD, Cape Town; Tyburn Gallery, London and exhibited as a selected artist at the 55th Venice Biennale in 2013. He has participated in various group exhibitions locally and internationally. In addition to numerous private collections, his work forms part of the public collections of Zeitz MOCAA and The Standard Bank Collection.