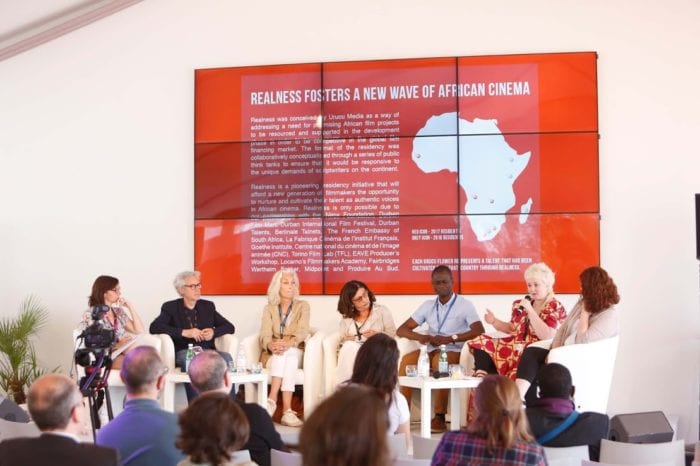 At an event hosted by La Fabrique Cinéma de l’Institut Français, one of the first supporters of the programme, the selection of this year’s Realness Screenwriter’s Residency was announced at the Cannes Film Festival by Realness co-founder Cait Pansegrouw.

Realness, which was established in 2016, aims to provide scriptwriting talent on the continent with the space, time and support needed to create and develop their vision. This year, over a hundred applications were received from twenty-one African countries. The international panel of industry experts with a stake in African Cinema, evaluated the submissions over three months, arriving at the five chosen residents in early May. “The Realness initiative continues to unearth some of the rarest talents from the continent,” said Thandeka Zwana from the National Film and Video Foundation, one of the volunteer readers on the selection panel. “The most impressive part of reading the submissions was getting insights into the applicants’ previous work and seeing real African cinema in terms of the aesthetic and storytelling. Some evoked memories of the old African greats and some spoke to a wave of new voices.” Marie Dubas, French producer of The Wound by John Trengove and one of the team that founded Realness said; “Selecting projects for Realness is a blessing and a huge responsibility. The projects are of a high quality, proving how rich the multiple African cultures are in nurturing unique stories. We know that for the scriptwriters behind these stories, Realness could be a life changing experience. We try to listen to the desires of these stories, and to allow the ones whose hearts beat the loudest to lead our choices.”

Selecting projects for Realness is a blessing and a huge responsibility.

The selected residents for 2017 are Lemohang Mosese from Lesotho, Mario Fradique Bastos from Angola, Rama Thiaw from Senegal, Samantha Nell from South Africa and writer-director team Gloria Huwiler from Zambia and Jahmil XT Qubeka from South Africa. Mario Fradique is an emerging voice in Angolan Cinema. His short films travelled to several festivals, winning awards along the way, while his first feature documentary, Independence, won Angola’s National Culture Prize in 2015. He joins us at Realness with his debut fiction feature, The Kingdom of Casuarinas, based on the novel by Jose Luis Mendonça. Gloria Huwiler is an actress and writer seeking to give a cinematic voice to her unique experience as a first generation mixed-race Zambian through Victoria Falls. Gloria has teamed up with acclaimed South African writer/director Jahmil Qubeka, best known for his second feature film, Of Good Report. Lemohang Moses hails from Lesotho, a country which has not produced many films. He is a self-taught, award-winning filmmaker and artist, with short film work that has travelled to over 100 festivals, winning top honours in Moscow and Milan last year. His debut feature is This Is Not A Burial It’s A Resurrection is the selected project. Rama Thiaw is a strong voice from Senegal that we have heard from before. Her two feature-length documentaries have garnered much success and awards, most notably the FIRPRESCI Prize at the Berlinale in 2016 for The Revolution Will Not Be Televised. She joins the residency with Life In A Spiral, her fiction debut. South African Samantha Nell whose short film The Beast premiered in Cannes last year brings her debut feature, Miles From Nowhere. Set in Johannesburg, the film is an absurdist dark comedy that takes place in an old age home following four of its residents. The project is also supported by the NFVF for development.

Realness, which was established in 2016, aims to provide scriptwriting talent on the continent with the space, time and support needed to create and develop their vision.

Realness 2017 begins on 3 June when the participants begin their residency at the Nirox Foundation in the Cradle of Humankind. They will be mentored by script consultant Nadja Dumouchel for their first week and will then enjoy 4 weeks of solid writing. In July they will attend the Durban International Film Festival (DIFF) where they will present their projects to the industry under the mentorship of Selina Ukwuoma at the Durban FilmMart. “We are grateful to DFM and DIFF for supporting the initiative and making this possible,” says founder and Creative Director Elias Ribeiro. “The screenwriters’  producers will also be invited to attend the finance forum at DFM this year.” Following this, the screenwriters will submit their work for awards consideration. Their projects stand the chance to be selected to participate at La Fabrique Cinéma de l’Institut Français, EAVE Producer’s Workshop, Torino Film Lab Meeting Event, Locarno Filmmakers Academy and Midpoint Feature Launch. “One of the biggest challenges for us has been to find operational funding and have operated with in-kind contributions, with the entire team behind this programme having worked on a volunteer basis for the past two years,” explains Ribeiro.

We are pleased that more recently we have received grants from the Goethe Institute of South Africa and the CNC, the French national Film Fund, which has been a welcome support for the progarmme.

“The CNC, in the framework of our policy of targeted support to the new wave of African talents, has decided to support this emerging writing residency, which offers young promising filmmakers from the continent a wide range of high-level international expertise. We are looking forward to the results of this second edition”, affirmed Michel Plazanet, Deputy Director of International Affairs. Fairbridges Wertheim Becker Attorneys have appointed Nosiphiwo Qwabi to help establish Realness as a NPO trust and qualify for PBO status. “The benefits of a PBO are that the trust would be able to issue a tax certificate or receipt, allowing for donations by donors to be tax deductible”, commented Andrew Hewitt, Fairbridges Head of Entertainment Law. Realness is an initiative founded and curated by Urucu Media, under the mentorship of Berlinale Talents and in partnership with the Nirox Foundation, Durban FilmMart, The Durban International Film Festival, Durban Talents, The French Institute of South Africa and Institute Français, Torino Film Lab, EAVE Producer’s Workshop, Midpoint Feature Launch, Locarno Filmmaker’s Academy, Produire Au Sud, Fairbridges Wertheim Becker, the Goethe Institute and Le Centre National du Cinéma et de L’image Animée (CNC).