Graffiti can be many things. To old, suburb-dwelling folk, it’s likely a sign of a deteriorating neighbourhood. To marketers, it’s a hip, youth-oriented tool for pushing product, and to greasy property developers, it can even be a tool for gentrification. Graffiti is an undeniably artistic medium, however, and an intricate one too. To me, graffiti is personal. And this, in part, is due to the fact that I used to write graffiti during my younger years in Cape Town, but it’s also the nature of graffiti that makes it a personal art form – a performative one. From the slow hiss of aerosol paints – the many smells they produce and the high, whiny headaches they can give you – to the shrill rattle of cans knocking against each other in your backpack as you traverse the city by night. Graffiti is intimate. It’s carried out in silence, often after dark and always concerned with the surface on which it’s being carried out upon. In cities like Johannesburg for example, which is made up of a seemingly endless collection of buildings, metal, dust and concrete, graffiti is arguably one of the few art forms that sees its artists truly interacting with their environment.

From the slow hiss of aerosol paints – the many smells they produce and the high, whiny headaches they can give you – to the shrill rattle of cans knocking against each other in your backpack as you traverse the city by night. Graffiti is intimate

Rather than being the faceless, directionless mass that many make it out to be, graffiti is an art form that’s hierarchical in nature. It contains levels. There’s bombing – the tags, outlines and chrome and black lettering carried out illegally and at speed – and then there’s the commissioned side of it which sees larger pieces and murals spreading throughout the city, painted legally, carefully and during the day. There are laws too. Strictly speaking, a mural covers a piece, which covers a throwup (quick pieces comprising one or two colours and an outline), which covers a tag. Never the other way around. To put a tag up over a mural or a piece is hugely disrespectful (and in some circles, can quickly see your own pieces and murals meeting the same fate). Similarly, public walls, trains, electricity boxes, and other city-owned property is an artist’s playground. Residential walls, religious or historical buildings, and most natural surfaces like trees and large stretches of rock face, are strictly off limits. These rules and guidelines exist for a reason. Most of the time, graffiti writers get a bad rap for what they do, and having a few kids who are new to the art form haphazardly running around their neighbourhoods and scribbling all over their neighbours houses doesn’t help graffiti much in the way of a moral code. 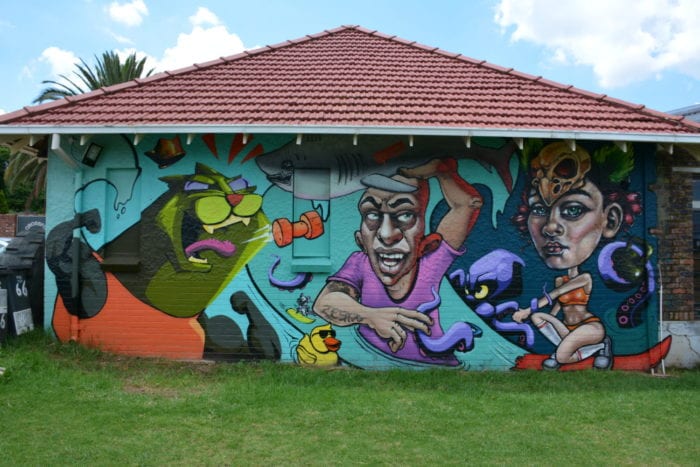 To provide a brief history, local graffiti is still a relatively young medium. To go back a few years, around the 1980s to be more specific, would find you at the origins of South African graffiti. Back then, graffiti came in the form of protest art (a form it repeatedly takes) calling for the downfall of the apartheid regime through thick, roller-painted letters on inner city walls. From there, it moved into more of a mainstream artistic movement, taking its lead from the hip-hop scenes in New York and further abroad. The execution was unrefined at first, mostly carried out with Ducospray and Sprayon cans as artists made the most of small and ineffective nozzles that clogged themselves up constantly. The style was mostly influenced by two small, but valuable imports: graffiti books like Subway Art and Spraycan Art by American documentarians like Henry Chalfant and Martha Cooper.

In this way, graffiti is less of an act of vandalism than it’s an act of performance art. Graffiti, like public performance art, disrupts. It’s a medium that jumps out at you, suddenly and without warning

The artists of the time (widely considered heroes now) went by the names of Gogga, Mak1one, Falko, and more and most, if not all of them, took to graffiti as a form of resistance. When I started writing graffiti around 2007, graffiti had become largely mainstream with white kids from the suburbs filling up the scene, but it was an active one nonetheless. The writing on the wall, then, came by way of Toe, Disk, Cros, Sure, Bzar, Wer, and many more, all of them taking notes from the writers before them, and further developing the local style. It was a time before platforms like Instagram could be used to showcase your work. Back then, few websites dedicated to South African graffiti existed and Flickr was the online meeting point of choice. Everyone, from newbies to established writers, would take to Flickr to share their latest piece, hunt down new spots, and share tips and tricks. Still, if you wanted to really see the city’s latest offerings, there was (and still is) no beating Cape Town’s Southern train line. 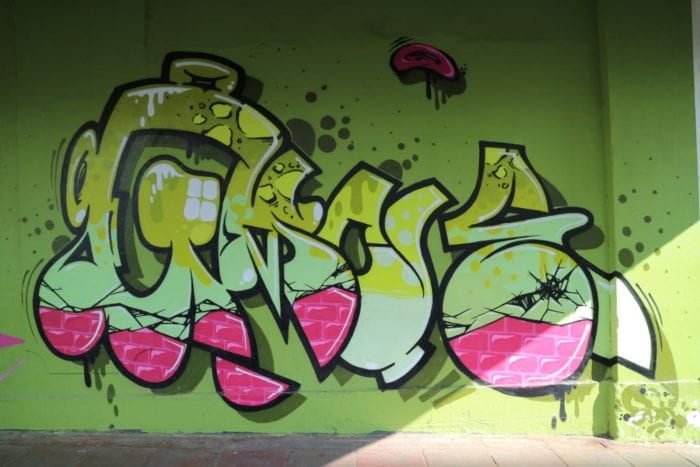 While Johannesburg’s public train system is almost spotless and Durban’s gets repainted on the regular, Cape Town’s trains are like roving urban galleries. The southern line in particular, which reaches from Simon’s Town through to the Cape Town CBD, carries with it an incredible amount of graffiti. I’ve never painted a train myself, but I’m told that putting your mark up on the steel carriages of the Metro Rail is no easy feat, with armed night guards patrolling all reaches of the yards. There are stories – bullets just grazing artists’ ears as they run, others being caught and swiftly thrown into holding cells – in short it’s risky business putting your work on a train. And yes, the act of painting over a form of public transport is undeniably illegal, but really, what other type of artist would risk that much to ensure their work is seen?

Rather than being the faceless, directionless mass that many make it out to be, graffiti is an art form that’s hierarchical in nature. It contains levels

The upshot of managing to paint one of these trains, however, is that you can be sure your piece will stay up for a good amount of time. The cleaning of graffiti from Cape Town’s trains, otherwise known as ‘buffing’, is an irregular practice. My guess is after spending all that money employing night-time security, they don’t have any leftover to actually clean the trains. That and the fact that the trains are in use far too much for them to be taken out of circulation all that often for a good scrub. A great deal of the city’s working population takes the train into work daily, meaning a great deal of eyes see the train’s graffiti too. It’s not just on the trains either. The some 40 kilometres of vibracrete wall that stands on either side of the tracks from Simon’s Town to Cape Town station is filled with graffiti, old and new. In this way, if you are on a long train ride without a book or a phone or any other form of entertainment, you need only look out of the window to see a host of new artworks on either side of you. 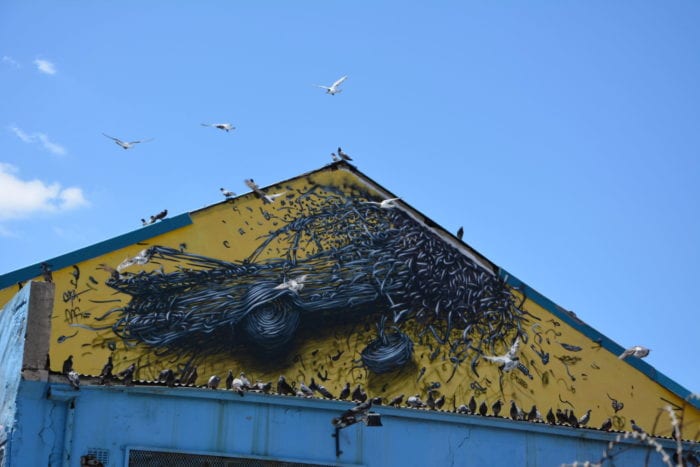 This isn’t something that’s limited to Cape Town’s train tracks, however. Durban, for all its natural greenery, is alive with new graffiti. This is most evident on the large overpasses that trace the seaside or further into the city along its narrow alleyways. Jo’burg can probably be considered the city with the most thriving graffiti scene. The work is everywhere, there’s just no escaping it. You’ll see it on your way to work by car or on foot, you’ll see it up on the backs of overhead road signs, on powerstations, down side roads, along highways, in the CBD, the suburbs – everywhere. It’s not just the larger cities either. Hell, I even saw some good work in Nelspruit a while back and Nelspruit, certainly, isn’t a place that’s known for its love of alternative art forms.

And yes, the act of painting over a form of public transport is undeniably illegal, but really, what other type of artist would risk that much to ensure their work is seen?

This is perhaps my favourite thing about graffiti. The way it forces its way into the public eye. Not commonly appreciated in contemporary art galleries or other white cube-like spaces, and forced to be actioned out illegally, it spills out onto the streets, over stop signs, along endless stretches of wall, onto the trains or highways and into further reaches of the city. In this way, graffiti is less of an act of vandalism than it’s an act of performance art. Graffiti, like public performance art, disrupts. It’s a medium that jumps out at you, suddenly and without warning, as if to say ‘Hey, I know you didn’t come here to see any art, but you’re here now and you’re gonna engage with me whether you want to or not.’ 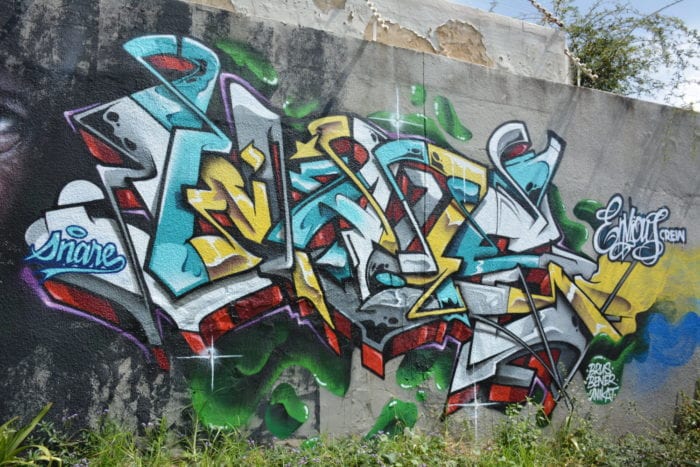 When I eventually gave up spray cans for the keyboard, and traded in crudely scrawled tags for bylines, I remember a friend of mine saying that what I do now – writing – isn’t all that different from what I did then – graffiti writing. ‘It’s pretty much the same thing,” he told me, “you’re just trying to get your name seen by as many people as possible.’ I figured he was right, really. That graffiti writing, like most public professions, is carried out primarily for the eyes of others, and ultimately, for your own validation or survival. This all changed when, during a long drive between the Eastern and Western Cape, I saw an old, dilapidated building. Inside it, shining through frameless windows in the harsh afternoon sunlight, was a perfectly painted piece. I cannot describe this building existing in any other location than in the middle of nowhere. It was the type of endless stretch of road that, if you were to stop on it, your car had either broken down, or you desperately needed to relieve yourself. But this artist had stopped here to paint a piece for no one other than themselves. They had painted purely for the joy of it.

While a piece like that disrupts no public space and garners no attention other than the odd driver with an eye for gleaming chrome and flexed letters, it’s still a piece of art. Furthermore, it’s a piece of art created solely because the artist wanted to create it that day, standing there in the heat and the still Eastern Cape surrounds, and painting. And in that way, graffiti – for me at least – will always be one of the most sincere forms of art I know.