The 19th ASSITEJ World Congress & Festival, Cradle of Creativity, has superseded the expectations of ASSITEJ SA, as well as ASSITEJ centres worldwide.

The 19th ASSITEJ World Congress and International Theatre Festival for Children and Young People, the Cradle of Creativity, was made possible through a significant grant of R2 950 000 from the National Lotteries Commission (NLC), as well as with generous grants from the National Arts Council, the Department of Arts and Culture, Rand Merchant Bank, the National Research Foundation, the Goethe Institute, Government of Flanders, Pro Helvetia, Business and the Arts South Africa and the City of Cape Town, amongst others. Dr Christel Hoffman of Germany who was one of the recipients of the ASSITEJ Applause for Lifetime Achievement Award at the Baxter Theatre Centre for her work internationally in theatre for young audiences said, “Indeed, this Congress was unique in the history of the ASSITEJ and a landmark for the future of our joined efforts.” The National Lotteries Commission was responsible for funding crucial aspects of the event, including specifically the festival, which played out across three major venues (Baxter Theatre, City Hall and Artscape Theatre Centre) as well as at several Cultural hubs in Atlantis, Philippi, Langa and Vrygrond. The contribution from the NLC ensured that these venues were technically equipped, and that translation was available in French and Portuguese, allowing participation from across the African continent and the rest of the world. The grant also contributed towards core staff costs, youth development stipends, catering and special events, such as the Opening Ceremony directed by Thando Doni and the widely-acclaimed Africa Day celebrations, curated by Mandla Mbothwe, with puppetry by Janni Younge and UNIMA.

The festival took place over a period of 11 days and secured full to decently sized houses for each of 63 productions and more than 200 separate performances, involving 464 artists, creating new audiences with a particular interest being shown in theatre for the very young.

The National Lotteries Commission played a significant role in supporting the marketing of the event, specifically with the printing of newsprint programmes which were distributed widely to the public as well as to schools across the country, particularly those in the Western Cape. The Cradle of Creativity drew 1340 delegates from around 100 countries to the event, and birthed a new network within ASSITEJ, being the Young Dance Network. The conference hosted more than 100 workshops and talks over the period, and school groups from Cape Town, Johannesburg, Limpopo and other parts of the country were able to participate in special packages which included age-appropriate performances and workshops, many of them sponsored in part or fully. One of the participants in the Next Generation programme, Philisiwe Twjinstra, from KZN, said about the experience, “I thought they made a huge mistake to have selected me and I felt horribly bad thinking that I might have wasted an opportunity for someone else who might have used it profoundly… but suddenly my heart story galloped in excitement when I watched Sandscape. A collaboration between Zimbabwe and Nigeria. That show liberated me and made me believe that as an African theatre maker, my stories are enough, I am enough, my way of telling narratives is enough and for the first time, I understood what collaborations really meant. I am grateful that I was selected, I needed access, I needed opportunity and Next Generation residency was just what I needed to shift my view and thoughts, to shift my career.”

ASSITEJ SA is proud to have created a platform in which so many African theatre-makers were able to find inspiration for their futures.

The Congress, the international gathering of ASSITEJ International, elected new members to the Executive Committee of the Association from Australia, Nigeria, Argentina, Chile, USA, France, Germany, Denmark, Norway, Russia, South Korea, and Italy. The director of ASSITEJ South Africa, Yvette Hardie, was re-elected as President of the international association for a final three-year term. The next two ASSITEJ Artistic Gatherings will take place in China (2018) and Norway (2019), with the 20th ASSITEJ World Congress & International Theatre Festival taking place in Japan in 2020. ASSITEJ SA is grateful to all those who made this event possible, including the National Lotteries Commission. The NLC relies on funds from the proceeds of the National Lottery. The Lotteries Act guides the way in which NLC funding may be allocated. The intention of NLC funding is to make a difference to the lives of all South Africans, especially those more vulnerable and to improve the sustainability of the beneficiary organisations. Available funds are distributed to registered and qualifying non-profit organisations in the fields of charities; arts, culture and national heritage; and sport and recreation. By placing its emphasis on areas of greatest need and potential, the NLC contributes to South Africa’s development. 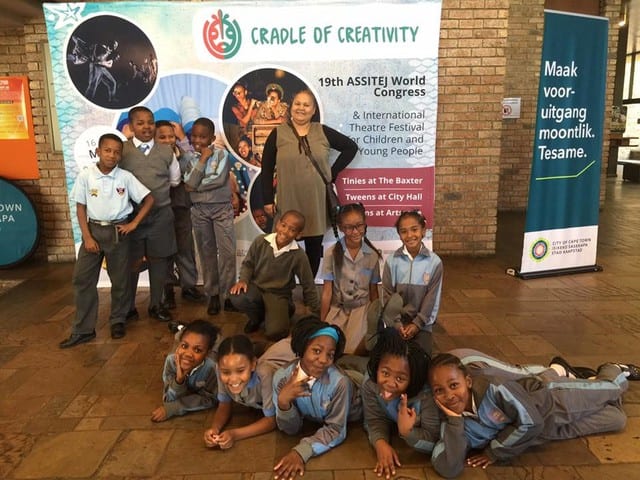 ASSITEJ South Africa connects and supports theatre practitioners, companies, organisations, institutions and schools across the country, who share a belief in the transformative difference that theatre makes in the lives of children and young people. It is the national centre for ASSITEJ (the International Association of Theatre for Children and Young People), which works in over 100 countries across the world. ASSITEJ SA was established in July 2007 under the leadership of Director, Yvette Hardie. ASSITEJ SA believes that every child and young person in our country deserves access to the arts, and especially to live theatre, from the earliest possible age. ASSITEJ SA focuses on: creating access to theatre for young people, supporting and developing emerging and established artists, empowering arts’ education, and connecting and advocating for the arts in the lives of young people. It works to improve the quality of theatre for young audiences in South Africa through international networking and exchange.