The multiple GRAMMY® Award-winning jazz pianist and world-renowned singer Diana Krall’s highly anticipated new album Turn Up the Quiet will be released on 5 May by Verve Records. 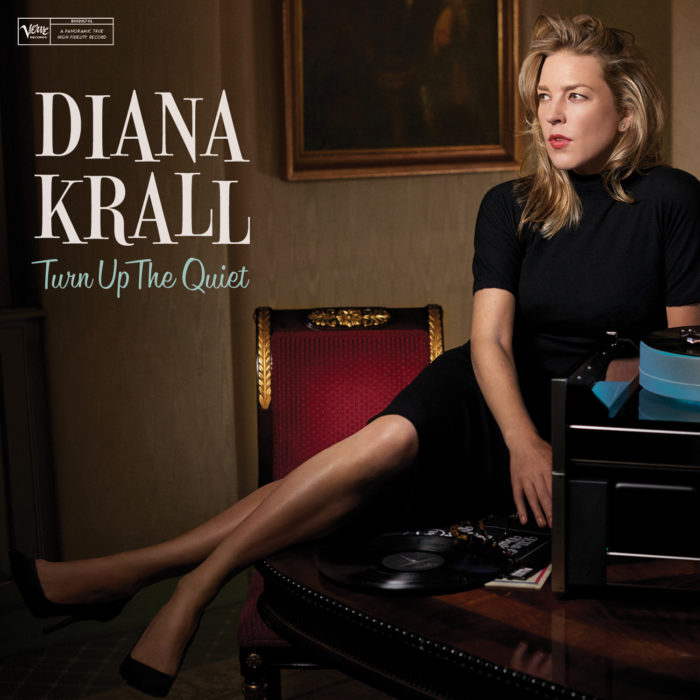 You only need to hear a few bars of Diana Krall’s new album Turn Up the Quiet to sense the joy the artist took in making this recording. The first words Krall sings are, ‘Lately, I find myself out gazing at stars’. Minutes later, the same voice asks, ‘Isn’t it romantic?’ with such tenderness that it is hard to disagree. ‘I have thought about these songs for a long time,’ says Krall. ‘Being in the company of some of my greatest friends in music allowed me to tell these stories just as I’d intended. Sometimes you just have to turn up the quiet to be heard a little better.’ Diana Krall is first and always a jazz pianist. This time out she is most determinedly the bandleader. She has chosen the repertoire, conceived the ensemble arrangements and gathered three distinct bands for these sessions.

Turn Up the Quiet is a co-production with Tommy LiPuma, producer of many of Krall’s most acclaimed albums, including, All For You, The Look Of Love and Live In Paris. The record was once again peerlessly engineered and mixed by Al Schmitt at Capitol Studios in Hollywood, California. Turn Up the Quiet begins with the trio of Krall, bassist, Christian McBride and guitarist, Russell Malone, who take a marvellous ride through ‘Blue Skies’. This lineup returns near the close of the record to be at the very heart of Johnny Mercer’s ’Dream’, which is also graced by one of the album’s most beautifully chosen orchestrations by Alan Broadbent. A quintet with Karriem Riggins on drums and Tony Garnier on bass features the fiddle of Stuart Duncan on ‘I’ll See You In My Dreams’, while Marc Ribot provides some of his most lyrical guitar playing with the band’s exquisite version of ‘Moonglow’.

The third ensemble on Turn Up the Quiet with guitarist, Anthony Wilson, bassist, John Clayton Jr. and drummer, Jeff Hamilton provides some of the most hushed and cinematic performances of the record; ‘Sway’ suggesting the story that continues after other movies have faded to black. Krall has always reached back into the riches of the past to animate and inhabit songs in the present moment but here on Turn Up the Quiet, she shakes any remaining dust from some of the finest leaves in that greatest of songbooks. Themes of love and hope are to be found in her choices but this is no mere escapism. Turn Up the Quiet is the work and play of a woman in the best days and nights of her life. Diana Krall is the only jazz singer to have eight albums debut at the top of the Billboard Jazz Albums chart. To date, her albums have garnered five GRAMMY® Awards, eight Juno® Awards and have also earned nine gold, three platinum and seven multi-platinum albums. Krall’s unique artistry transcends any single musical style and has made her one of the most acclaimed artists of our time.