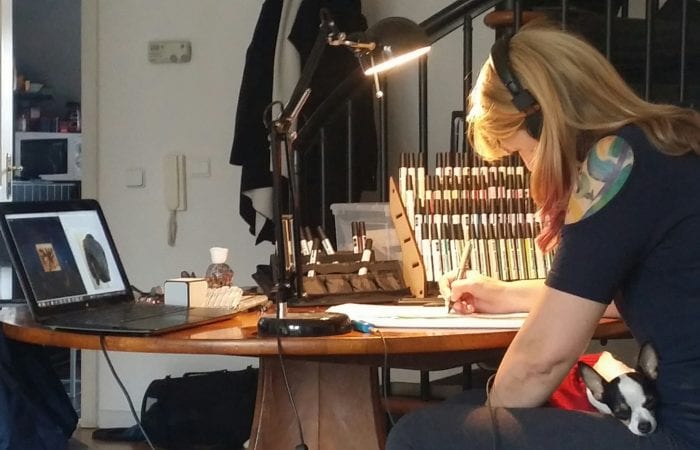 From live productions to film and television, the characters that we see are elevated by the theatrics in their costumes.

Building personality with clothing is an art form on its own, one that Hayley Nebauer is incredibly skilled at. Arguably one of the most important roles in theatre, television and cinema is that of the costume designer. Costume designers’ stylistic contributions to the world of film and, by extension, to our own worlds, is undeniable. Their work contributes to constructing the characters we love, enhancing the production’s setting via colour and texture, and in some instances transcends the screen and informs our perception of style in our own lives. The major film, television and theatre awards around the world recognise costume designers for their ability to escalate a production, to make it believable, and to fully transport viewers to the desired time period or destination. Just as one hears the work of a composer and is transported to the memory of a scene, so too can the work of a costume designer bring a particular film or character to mind. One only has to remember the white halter dress Marilyn Monroe wore in The Seven Year Itch (1955), the black-on-black leather ensemble worn by Keanu Reeves in The Matrix (1999), or Hannibal Lecter’s orange jumpsuit and face mask from The Silence of the Lambs (1991) to revisit the visuals and emotions of their respective films.

Creating unique costumes ideal to the needs of each director and production, Hayley Nebauer has worked as a costume designer for film, television and theatre since 2000. Now based in the UK, the Australian-born costume designer grew up in Tasmania and had an early interest in costume history and science fiction. The projects she takes on reflect, in particular, her interest in science fiction. From the dystopian short AIR (produced by Nebauer) with its detailed and clever ‘survival suit’ to the anthropomorphic ‘goat demon’ in A Lonely Place to Die (2010), Nebauer creates imaginative and interesting pieces that bring a sense of strange realism to the productions. Influences of contemporary architecture and industrial design objects are recognisable in her works, showing Nebauer’s ability to consider unusual elements and incorporate them into contemporary films or productions. Other recent exciting work includes the third series of the visual and swashbuckling BBC drama The Musketeers, the tenth series of cult hit Dr Who, highly acclaimed BBC miniseries Our World War (a WW1 Drama), Take Down, a thriller/drama feature film from director Jim Gillespie (I Know What You Did Last Summer) and Pinewood Films and TV drama Cyber Bully.

‘Whether looking at minimalist contemporary clothing, period-accurate costume or creating a new aesthetic specific to a new project, I always put the needs of the production first so that work created is right for the character, the story and above all, working effectively with overall creative concepts for the production in focus,’ says Nebauer.

‘Specialising in a design process called “Hybrid design”, I often use the friction between contrasting aesthetics and themes to generate new ideas, fusing and blending references in unexpected ways to create new, streamlined designs specific to each production.’ Colour remains a central focus of Nebauer’s work. A controlled and rich colour palette can define a production as strongly as the aesthetics themselves. Balance through asymmetry and the use of hard curves also define Nebauer’s more stylised works. ‘I love being part of the creation of telling stories, especially in the making of visuals that support this. I spent much of my childhood playing imaginary games or was up a tree – working in the film industry as an adult is like the practical application of this – we see stories we like, or that thrill or engage us and we invent the world around the characters to make it real.

‘I chose costume design because I love the visual richness and movement of costume, something about putting on a costume and becoming something or someone else is appealing and intoxicating, creatively, to imagine and create a person in a place and flesh out the details around them.’