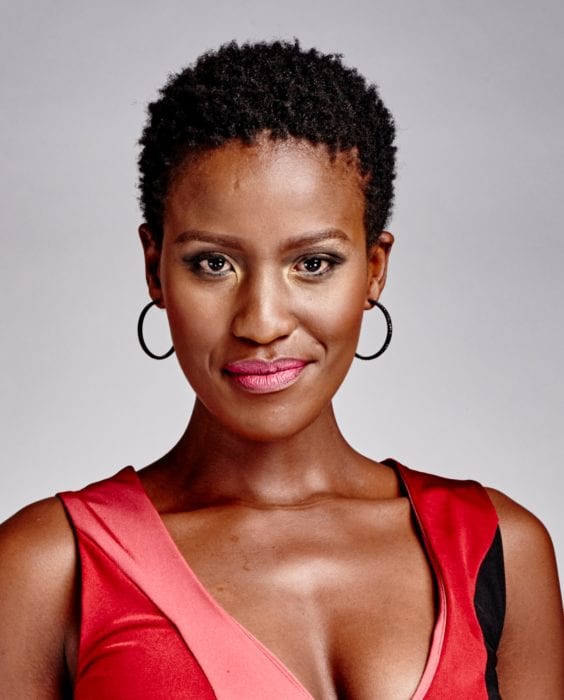 The ethereal and spunky award-winning actress, Masasa Mbangeni, is the face of the South African Cultural Observatory’s (SACO) May National Conference, which she will host as master of ceremonies (MC).

Mbangeni is a Royalty Soapie Award and South African Film and Television Award (SAFTA) winning actress, best known for her starring role as the arch-villain, Thembeka Shezi, on the eTV soapie, Scandal. This is the second conference hosted by the relatively new think tank, established by the Department if Arts & Culture (DAC) in 2015, to measure and value South Africa’s creative and cultural economy. The SACO is hosted by Nelson Mandela University, in partnership with Rhodes University and the University of Fort Hare, but operates nationally. Over 50 high-level national and international speakers are committed to the conference which will explore international, national and local perspectives on the relationship between the creative economy and development. The event takes place on 24 and 25 May 2017 at the Turbine Hall in Johannesburg.

Speaking about the opportunity, Mbangeni said, “To say I am honoured would be a complete understatement! What an exciting time it is to be a part of the creative industries and hosting such a prestigious event allows me the opportunity to be a part of the conversations and hopefully affect positive and impactful change in the trajectory of the creative industries.”

Mbangeni says the South African cultural and creative economy is in a state of flux, with exciting potential. “There is a growing recognition of the potential and contribution of the creative and cultural economy in our society. Not only is the value of this sector recognised from an intrinsic position but also from an economic position. Never before has there been so many opportunities for practitioners in the sector. “Young people are creating their own opportunities, taking responsibility and pushing boundaries. However, there is still space for growth and professionalisation of the sector; and more public-private partnerships need to be encouraged to ensure systemic change that advances the creative and cultural sector in South Africa,” she said. The SACO said it was pleased to secure such a high calibre MC. “Mbangeni was born and bred in Port Elizabeth, home to our headquarters. She studied dramatic arts in Johannesburg and later pursued a professional acting career where she has made a name for herself in a very competitive industry.

“She is a leading example of the Eastern Cape’s role as a cradle for creative talent and an inspiration to all young artists. Her special interest in promoting the transformative power of the arts through the work she does makes her a natural fit to act as the conference host,” said SACO chief executive, Prof Richard Haines. He added that her deep understanding of the film, television and stage industries meant she would bring both knowledge and experience to managing the expansive programme. “South Africa’s creative and cultural industries contribute about 3% to our gross domestic product – and employ hundreds of thousands of people. Masasa knows this and has lived her life as a talented and passionate creative. She will bring significant practice-based insight to our conference.”

The standard rate for the conference is R2400 and R1600 for students. For more information and registration information visit: SACO 2017 National Conference Website.

About the South African Cultural Observatory

Initiated by the Department of Arts and Culture, through the Mzansi Golden Economy Strategy (2011), the South African Cultural Observatory (SACO) is a statistical and socio-economic research institute which charts the socio-economic impact of the arts, culture and heritage (ACH) sectors and the cultural and creative industries (CCIs) in South Africa. We use a range of innovative statistical methodologies, audits and research tools to understand our creative economy. Our main purpose is the development of a comprehensive cultural information system which continuously captures cultural data and monitors and evaluates government initiatives in the ACH sectors and CCIs. The SACO is headquartered in Nelson Mandela Bay – hosted by Nelson Mandela University on behalf of the Department of Arts and Culture, in partnership with Rhodes University and the University of Fort Hare – but operates nationally analysing the CCIs and ACH sectors. The SACO was established in 2015.

Enter the SA Cultural Observatory’s lucky giveaway competition for a chance to WIN!