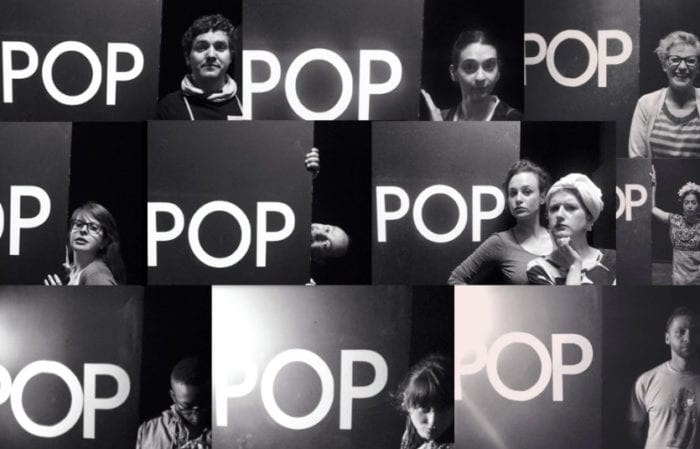 Launched as a performing arts centre and fringe theatre venue in 2011, POPArt has grown into a recognised institution in Johannesburg where performers come together to share new work and ideas as well as access opportunities through the company’s various platforms. Over the past six years, POPArt has partnered with multiple industry professionals who have staged their work at the fringe space in Johannesburg’s Maboneng Precinct, many of which have graduated to the main stage. POPArt has also, in this time, created an in-house production company – as well as created many successful in-house brands and significant partnerships that have worked toward elevating the reputation of performing arts and artists. “We couldn’t be prouder of the way in which the vision has grown over the years. The growth of the business is largely as a result of our constant discussion with fellow artists about what is needed to grow our industry,” says Hayleigh Evans, co-founder of the company.

“This is the exact reason that we have continued to celebrate our birthday each year with the 24 Hours in the City celebration. It is the ultimate event to reflect the key principles of the POPArt brand: collaboration and networking to inspire new work”.

24 Hours in the City takes place on the 22 April at 20:00 at the Ramalao Makhene Theatre (Market Theatre Precinct). What is it, you ask? It’s a weekend-long festival for theatre-makers and a one-night-only experience for audiences. In short: six writers, six directors and twenty-four actors have 24 Hours to make six all new ten minute plays. “Every year, we rally some of the best makers in the biz – including many Market Laboratory alumni – to get together and create this excellent evening of entertainment,” says Evans. And this year, in the third year of a unique partnership between the Market Theatre Laboratory and POPArt, we are thrilled to announce that the partnership will be extending even further this year with the annual 24 Hours in the City event being staged at the Ramolao Makhene theatre at the Market Theatre Laboratory. POPArt has been given access to this brand new 180-seater theatre on the new Market Theatre Lab premises in order to accommodate more audiences for the popular annual festival, because more audiences mean more bursaries. All proceeds from the event go toward bursaries for students at the Market Theatre Lab. As such, POPArt has also committed to and named recipients for two second year students for 2017. “The partnership between these two institutions is so strong because it’s about a professional theatre investing in the next generation of theatre-makers,” says Clara Vaughan, Education Officer of the Market Theatre Lab.

Come through to 24 Hours In the City and you’ll be guaranteed an evening of fresh culture and entertainment in a celebration of fresh theatre and a new generation of theatre-makers. 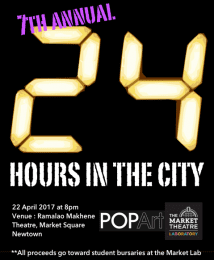 Tickets available at: www.markettheatre.co.za or at the Market Theatre box office.