Mbongeni Ngema and team have finally gathered to commence previews amid the highly anticipated return of Sarafina at the South African State Theatre (SAST).

After sourcing talent from across Gauteng, a team of young and hungry artists is assembled and ready to deliver the production within five weeks. The Broadway hit musical is expected to stage from the 10 March to 10 May. Sarafina is a musical experience with songs performed in the tradition of Mbaqanga, fused with jazz, rhythm and blues, and gospel. This proudly South African musical, set during the 1976 uprisings in Soweto deals with the radicalisation of a young school girl who becomes embroiled in the riots and is tortured by the South African Police. The musical is set in the Morris Isaacson High School against the backdrop of students revolting against Afrikaans being used as a medium of instruction. Ngema says it will be a pleasure to present this work again after the original version was resurrected in 2004 when we celebrated ten years of democracy in South Africa. 2016 has marked the 40th anniversary of the 1976 uprising and massacre of young people of South Africa, while Sarafina celebrated its 30th. “Sarafina is no doubt one theatrical piece that remains and will forever be a constant reminder of the pain, the misery and most importantly the hope that young people had for the South Africa that we are enjoying today. Furthermore, this is the time to tell our own stories,” Ngema said. SAST Artistic Director, Aubrey Sekhabi, is as well excited to welcome back Sarafina to the stage. During its second run at the State Theatre in 2004, the production attracted more than 25 000 people with 27 performances, he predicts it will attract more audiences to the theatre. “It is a winner and with challenges facing our educational system, arts and culture must step up and help us look back and remember that this democracy was achieved through blood and tears and that education is a right and not a privilege,” Sekhabi said.

Born in Verulem in 1956 and raised in the heart of Zululand, Mbongeni Ngema has distinguished himself as a renowned playwright, screenwriter and librettist. He is best known as the writer of the internationally acclaimed and award-winning musical Sarafina!, which was nominated for five Tony Awards, and later nominated for the prestigious GRAMMY Awards. The musical won 11 NAACP Image Awards enjoyed a two-year run on Broadway, toured the USA, Europe, Australia and Japan and was later adapted into a feature film starring Whoopi Goldberg, Leleti Khumalo and Miriam Makeba. Ngema has had a string of blockbusters that include his award-winning and internationally revered Woza Albert, Township Fever (1990), which travelled from the Market Theatre to the USA to the Brooklyn Academy of Music’s Majestic Theatre; Mama (1995), Asinamali (1996), Maria Maria (1997), The Zulu – the musical (1999), 1906 Bhambada The Freedom Fighter, The House of Shaka (2005) and The Lion of the East (2006). 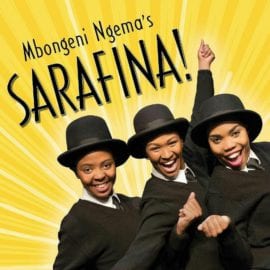 The powerhouse musical took Broadway by storm in January 1988 during black history month, culminating in a two-year run on Broadway in Manhattan New York City and a five-year tour of the United States of America concurrently. A second cast of Sarafina, which also premiered at the Market Theatre in 1988, went on a world tour for four years, which included the UK, Europe, Australia, Japan and West Africa. Sarafina was later converted into a Hollywood Feature Film starring Whoopie Goldberg and Leleti Khumalo, Dr Mbongeni Ngema, Dr John Kani and Dr Mirriam Makeba, with the soundtrack produced by Dr Mbongeni Ngema and Quincy Jones. The film captured the imaginations of the world and iconicity engraved Sarafina as a symbol of African triumph and hope the world over. The NAACP (National Advancement of Coloured Peoples) movement saluted this giant endeavour by an African son of the soil, Mbongeni Ngema with eleven image awards in Hollywood Beverly Hills. A GRAMMY award nomination and five Broadway Tony Award nominations were bestowed in his honour.

The new Sarafina has been found. A young lady, Noxolo Dlamini was discovered and chosen by Dr Mbongeni Ngema and his company Committed Artists, to be the one to fill in the big shoes of the former Sarafina, Leleti Khumalo. All the way from Chiawelo Township in Soweto, the 23-year-old is geared for this mammoth task to star as Sarafina in the highly anticipated return of the international multi-award winning Broadway hit musical Sarafina at the South African State Theatre, Pretoria. The young Dlamini holds a BA in Dramatic Arts from the University of Pretoria which she obtained in 2014. Her acting career “began” in high school when she went to the National School of Arts for two years, where she was nurtured as an artist. Highlights of her varsity years include featuring in internationally acclaimed productions like the Lion King in London, directed by Julie Taymor; Fantasy of Light by Lizz Meiring. Her hustle also landed her at the National Arts Festival in Grahamstown to star in Street Lights with Lips directed by Napo Mashiane and Bad Boy the Musical directed by Davel.

Dlamini is humbly excited, at the same time nerve-wrecked about her lead role. “I am honoured and privileged to work with the big names like uBaba Ngema, and the experienced cast of Sarafina. This a nerve-wrecking opportunity that has big shoes of Mama Leleti Khumalo, whom I look up to so much.” she explains.

Dr Ngema says, “Noxolo was spotted during the Sarafina auditions held last year and she exceeded our expectations as Committed Artists. From that day we knew we had found Sarafina!

“Sarafina is no doubt one theatrical piece that remains and will forever be a constant reminder of the pain, the misery and most importantly the hope that young people had for the South Africa that we are enjoying today. Furthermore, this is the time to tell our own stories,” Ngema added. The previous run of Sarafina at the South African State Theatre was in 2004, where it attracted more than 25 000 people with 27 performances. It is expected to go further. Sarafina will show LIVE at the 1 300 seating capacity Opera Theatre from 28 February to 20 May. This will be the longest African Musical Show to run in the history of State Theatre.

Tickets are available through Computicket and range from R120 to R180. The show will preview from 27 February to 9 March for R80, then officially open on 10 March at the Opera Theatre .