After five years of discussion, the long awaited album collaboration between talented Mozambican saxophonist, Moreira Chonguiça and the ‘Lion of Africa’, Cameroonian, Manu Dibango, is here.

The album is being released today, Friday 31 March 2017, at the 18th edition of the Cape Town International Jazz Festival. In February 2015, the two African saxophonists began discussing a list of songs. In March 2015, Moreira flew to Paris to rehearse with Manu Dibango’s band comprising Cameroonians, Jacques Conti Bilong on drums, Guy Nwongang on percussion, Justin Bowen on piano-keyboards and Guy Nsangué Akwa on bass guitar and Valérie Belinga on vocals. From France, Patrick Marie-Magdelaine on guitar, Isabel Gonzalez on vocals and two-time GRAMMY award-winner – for his work with The Zawinul Syndicate – Paco Séry on sanza (more commonly known as the mbira).

‘I am honoured and humbled by the opportunity and circumstance created by “Papa Manu” to express, experiment, sometimes in a very disruptive manner, the rhythms and grooves that I have never heard; the chords and melodies that I never thought I would record; the meals, talks and jokes that we shared whilst building this historical storm. M&M is a celebration of similarities and differences, diversity and pluralism, love and hate, empathy and passion. M&M mirrors once more that in a creative world the best form of evolution is the collaboration. M&M is the true reflection that as Africans we can live together, love each other and break all negative boundaries related to our wellbeing,’ says Moreira.

The album was recorded at Ferber Studios in Paris, France under engineer Guillaume DuJardin and was mastered at Milestone Studios in Cape Town, South Africa by Murray Anderson. Moreira Chonguiça has produced the album, he performs on alto and soprano saxophone and the arrangements, with the exception of Track 1 and 10, are by Manu Dibango who performs on the vibraphone and saxophones. For Manu, it was an opportunity to give African meaning to established American jazz standards and to ‘return the boat to African soil’. For Moreira, the privilege of working with Manu at this level was an extraordinary experience that only comes along once in a lifetime. Moreira and Manu first collaborated on Moreira’s second album The Moreira Project Vol 2: Citizen of the World on the track ‘West South Side’, which has been included as a bonus track. Manu Dibango has released over 40 albums to date with nearly 800 songs including collaborations and duets. 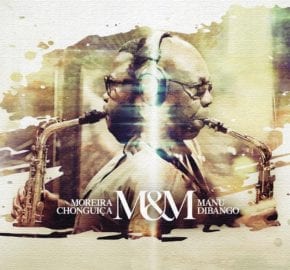 ‘The idea and perseverance for this album came from Moreira! We have been friends and collaborating for about 15 years. It is a very nice album, for which I took great pleasure in writing the arrangements, an African re-reading of the music made in the USA: the return of the “boat” on African soil. I hope that those who listen to it will take as much pleasure as we did when it was recorded in Paris. We had sought, Moreira and myself, an atmosphere of peace and serenity where only music is the Master. So we invite you to listen, dance and vibrate body and soul,’ says the legendary Manu Dibango.

The CD will be on at all good music stores and online from www.CDBaby.com.