Save the date! Showtime Management’s 10th Anniversary Production of RENT IN CONCERT takes place at Montecasino’s Teatro on Monday, 15 May 2017 at 20:00. Tickets are now on sale at Computicket.  Presented by Showtime Management, this celebratory one night fund-raising concert features the much loved iconic and popular numbers from the stage production of RENT including ‘Seasons of Love’, ‘Out Tonight’, ‘Without You’, ‘Will I’ and ‘Take Me Or Leave Me’ performed by the original South African cast who reunite especially for this concert. They last performed together to rave reviews in the Tony and Pulitzer Award-winning musical production of RENT, produced by Showtime Management ten years ago at the Alexander Theatre in Braamfontein and then Artscape, Cape Town. “One is tempted to return just to relive the glorious music,” raved the Tonight on 20 July 2007 and now “Rentheads”, fans of the musical and theatre-goers are invited to take this once-in-a-lifetime opportunity to enjoy RENT IN CONCERT.

Based loosely on Puccini’s La Boheme, the musical production of RENT follows a year in the life of a group of impoverished friends struggling to make it in New York’s East City Village as they struggle with relationships, drugs, loss, love, creativity, HIV/AIDS and paying their “rent”.  This concert version presents the entire score sung and performed with minimal staging. It’s all about the music, the songs and the strength of the beautiful voices that will have audiences singing along or sitting mesmerised, longing for more.  All proceeds go to HospiceWits whose “no end to caring” motto resonates with RENT’s themes of love, losing a loved one to a terminal illness, friendship and support. The music and lyrics written by Jonathan Larson performed by the South African cast tell the touching story though song.

“HospiceWits has provided the highest quality of care and support to hundreds of thousands of hopeful patients and families affected by life threatening illnesses in Johannesburg over the past 38 years. The funds provided by this event will be used for the continuation of that care in our compassionate environment which enables patients to feel supported and encouraged on the journey of life-threatening illness.” says Joy Ruwodo, Marketing Manager, HospiceWits.

The cast is passionate about the concert and eager to give of their time to support HospiceWits. All the 2007 leads – including Shaun V who is flying in from Dubai – and some from around the country, sees Duane Alexander, Aubrey Poo, Zane Gillion, Thokozani “Zano” Nzima, Talia Kodesh, Sivan Raphaely and Ilse Klink together with fellow cast members Chantal Herman, Jaco Van Rensburg, Anton Luitingh, Megan Victor-Carelse and Lorri Strauss on stage on 15 May. New to this staging will be Phillip Schnetler and Nicholas “Nicksoul” Nkuna, who are looking forward to joining the original performers. What started as a light-hearted Facebook chat about getting together for the 10th Anniversary of RENT is now becoming a reality.  Hazel Feldman and Tony Feldman of Showtime Management, the original producers of RENT are lending their full support to RENT IN CONCERT and Montecasino, the concert host is providing the Teatro as the concert venue.

Technical companies Gearhouse Splitbeam, ProSound and Computicket have donated their services while Music Theatre International New York and the Jonathan Larson Estate has waivered performance royalties, therefore greatly assisting in raising funds for HospiceWits. The concert also reunites the 2007 creative team of choreographer Jill Somers with Anton Luitingh and Duane Alexander who will recreate their performances in RENT as well as co-direct the concert version. Music Supervisor, Bryan Schimmel will once again, lead the band. “RENT radically changed the Broadway musical in the 1990’s, so in keeping with our vision to continually provide world class entertainment that is unique to our venue, the Teatro at Montecasino is thrilled to be hosting this once off event to raise money for a very hardworking organisation such as HospiceWits” Bryan Hill, General Manager, Teatro

“To be a part of Rent once in a lifetime is a gift, to have a second opportunity to indulge in the music, the characters and the story with the original South African cast and creative team is quite unbelievable. And to play Maureen who is an activist and protest performer, now, in 2017, when the world seems to have turned upside down, makes it ever more meaningful.”  Sivan Raphaely.

“It was through RENT that I really got the idea of a cast as a true, ensemble unit, working together to just ‘tell the story’ – presenting the flawed, messy characters as they are and allowing them to guide us through the ups and downs of their lives – always leading to the goal of “Remembering the Love”. The process of creating RENT SA was a hugely challenging time for me, personally and presenting it 10 years later, allows me to celebrate my own finding of myself, my inner strength and above all, the love that shines through all experiences.”  Chantel Herman.

“RENT is such an important piece of theatre. Besides bringing pertinent issues like Aids, homelessness and homosexuality to the forefront, it’s the theme of accepting diversity that made me fall in love with the piece. In a world plagued with racism, homophobia and exclusion, RENT inspires us to accept and love one another because of, and not in spite of our differences. After seeing RENT in New York in 1998 I became completely obsessed with the piece, learning every word by heart. Ten years ago, it was a dream come true for me to be a part of this incredible show, especially as it was so close to my heart. It really is such a privilege to be able to perform in RENT not once but twice in a lifetime!” Lorri Strauss.

“To feel Jonathan Larson’s music in my blood again and to reunite with our magnificent SA Rent family, I just couldn’t possibly say “no”!  Talia Kodesh.

“RENT is the kind of musical that follows you throughout your life and I have wanted to revisit this material for a long time. I was a baby when I did this show and it’s wonderful to be at an age and stage in your life where you finally have the life experience to do this beautiful piece justice. I wasn’t even out of the closet when I did this show and now I am married to the best person I know. RENT made it okay to be gay and look at how far we have come. Measure in love always.” Megan Victor-Carelse. 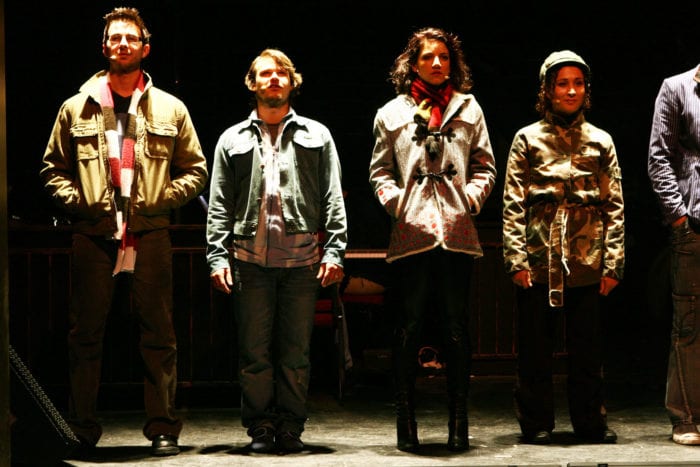 No day but TODAY! Tickets for this one night only concert are limited and patrons are encouraged to book at Computicket as soon as possible. #RentConcertSA