History Will Break Your Heart takes its cue from the works of South African artists Ernest Mancoba, Gladys Mgudlandlu, and writer Rolfes Robert Reginald ‘R.R.R’ Dhlomo. Employing narratives of remembering and re-enactment, the exhibition presents the fractured personal stories of these artists in relation to Wa Lehulere’s own work, and questions the detrimental effects of society’s collective memory on the lives of these artists. Working within the genres of video, installation and drawing, History Will Break Your Heart explores intimate narratives that speak of the contradictions inherent in personal versus collective memory.

Growing up in Gugulethu, 30-year-old Wa Lehulere was surrounded by a creative family as a child. His mother was a singer and his cousins were scriptwriters, directors and actors in film and theatre. Despite having won five awards, including the first International Tiberius Art Award Dresden, launched in 2013 as a tribute to outstanding contemporary artists outside of Europe; having had four solo exhibitions; 50 group exhibitions and six residencies, he remains humble in his achievements and emphasises the importance of hard work, exposure to the arts and collaboration.

The most important thing for me has been to read as much as possible, interacting with other artists, going to see shows, going to the theatre and watching a lot of independent films. It is also important to keep working and that doesn’t mean producing physical things but researching and writing as well. 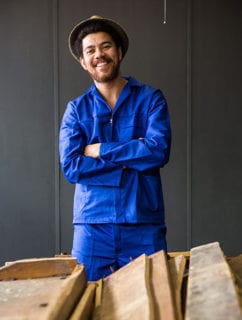 Performer, photographer and filmmaker, initially a theatre aspirant working with the Cape Town Theatre Laboratory, Wa Lehulere enrolled in a performing arts course at CAP (Community Arts Project) and decided to change to a visual arts course because he wanted a challenge. Here, he garnered experience in drawing, painting and sculpture. From there his interest moved to new media and film and he recalls: ‘Initially I became drawn to works which dealt with identity politics because I could relate. I looked a lot at Berni Searle, Tracey Rose, and Thando Mama. That kind of work became my interest, instead of painting. Even though I have continued painting and drawing throughout, that was what drew me in, quite strongly.’

Co-founding the arts collective the Gugulective, and collaborating with the Centre for Historical Re-enactments and the NON-NON Collective, Wa Lehulere focuses on initiating conversations in the arts, particularly bringing the arts into the townships and making it accessible to the masses. Wa Lehulere’s visual artworks range across media where he is particular about not conforming to one medium and draws on a range of subjects by being open to the unknown. His ethos, ‘The Foot Has No Nose’ is a Xhosa idiom, meaning one doesn’t know where one’s journey is going, or where one is headed, is closely linked to this.

Theatre also influences his works by using props to change the traditional meaning of spatial relations on stage or in a gallery. He explores themes of boundaries: portals between the living and the dead, the past and the present; segregation, discrimination and identity. Wa Lehulere uses iconic objects as reference points to represent these themes. The longevity of his works are influenced by the medium in which he presents them: from using charcoal and chalk to create works, playing on the idea of preservation.

History Will Break Your Heart is showing at the Standard Bank Gallery from 15 April to 18 June 2016.