This year Mexico City, with its rich and diverse arts scene, was chosen to mark the culmination of the 2014-2015 cycle of the internationally celebrated mentoring programme, the Rolex Mentor and Protégé Arts Initiative.

Hundreds of arts lovers from Mexico City joined cultural luminaries and arts journalists from around the world. All had travelled to the home of Diego Rivera and Frida Kahlo to celebrate the work carried out by the mentors and protégés of the 2014-2015 Rolex Mentor and Protégé Arts Initiative.

Among the star-studded gathering, at one of the largest performing arts complexes in Mexico, were artists and creative leaders from the Arts Initiative’s growing community. Current mentors, Mexico’s multi-Oscar winner Alejandro González Iñárritu among them, joined former mentors and advisors, including Mira Nair, William Kentridge, Julie Taymor, Mark Morris, Lin Hwai-min, Kazuyo Sejima, Sir David Chipperfield, Robert Wilson and Pierre Audi. Many of the 43 protégés from past cycles of the Arts Initiative – each with a growing international profile, were also in attendance.

In the Teatro Julio Castillo, a conversation took place between Congolese artist and photographer Sammy Baloji and his mentor, Danish-Icelandic artist Olafur Eliasson, who is acclaimed internationally for his large-scale art installations. Among other subjects, they focused on Baloji’s powerful photographic and installation work, which was mounted in the theatre’s lobby, and which examined post-colonial identities, borders and African urbanisation.

Captivating was the wide-ranging conversation on architecture between revered Swiss architect Peter Zumthor, a Pritzker and RIBA prize-winner, and Gloria Cabral who, during the course of the mentoring year became project manager of her mentor’s tea chapel project near Seoul. Zumthor’s superstar status in Mexico meant the presentation had to be moved to a large tent on the Plaza Ángel Salas, which accommodated the hundreds of university students who gathered to hear their idol.

But it was the dance performance, Body of Your Dreams, a collaboration between dancer/choreographer Myles Thatcher (mentor, Alexei Ratmansky) and his fellow Rolex protégés, architect Gloria Cabral and lighting designer Sebastiàn Solorzano Rodriguez that captured the mind of just about everyone and was greatly discussed and praised. Myles Thatcher actually presented five of his dance pieces and all of them were outstanding. Anyone who thought they might not enjoy ballet was entertained and transported into their multilinear narratives by his wonderful choreography.

This work, a world premiere, was only completed hours before Myles Thatcher and his troop finished it in rehearsals leading up to the performance. Gloria Cabral’s intriguing set starts flat against the backdrop with no clues that it will soon fold out to create multiple landscapes, psychological interiors and dimly realised mirrors for Thatcher’s body obsessed dancer/characters to check out their silhouettes. The soundtrack (by Andrew Russo) is a modern classical piece, combining ‘madcap piano arpeggios and mashed up spoken word snippets, that sound as though they have been nicked from fitness videos’.

Long after the dance performance finished one was left with its multi layered ideas, in awe of the dancers and admiring this young choreographer Myles Thatcher who was mentored by Alexei Ratmansky. Being only in his mid-20s, Myles Thatcher is somebody to look out for, as surely he will go far.

And then there was of course the film category and with the arts weekend being held in Mexico City it was inevitable that the work of Oscar-winner Alejandro González Iñárritu (Birdman) was the greatest draw card for the local audience, as well as the international visitors. Over the course of the weekend in González Iñárritu’s hometown, he celebrated his protégé, Israeli filmmaker Tom Shoval in a co-presentation of clips from both men’s films (including González Iñárritu’s much anticipated film, The Revenant).

González Iñárritu said he chose Shoval precisely because he saw a lot of quiet humanity in Shoval’s first filmmaking efforts. González Iñárritu echoed his protégé’s desire not to make anything predictable, warning that ‘Hollywood has created something so tasty, it is easy for audiences to forget other diets.’ In an extensive parable that compared mainstream films to the culinary equivalent of McDonalds and Starbucks, and which also referenced the 17 tries it took to get his son to try oysters, González Iñárritu said that what united him and Shoval was a joint commitment to filmmaking that poses ‘a threat to the comfort of people’s diet in every aspect, culturally speaking.’ 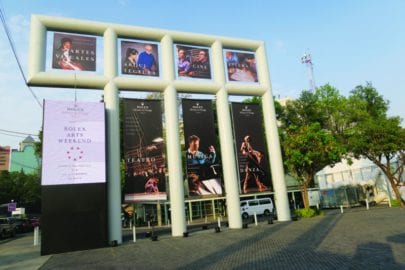 ‘Israel is not Hollywood. It is a small film industry where it’s still hard to raise money. You need a certain amount of trying to convince the producers that the film can be commercial, but sometimes it conflicts with your motivation to try and discover something new and to show other angles of humanity,’ Shoval explained. ‘One of the thingsthat the mentorship has offered is for me to see Alejandro dealing with all those aspects and challenges. It gave me inspiration to try not to lose my motivations and my ideas.’

During the year of mentorship González Iñárritu invited Shoval to observe the post-production of Birdman and to be by his side for six weeks in the snow-bound Canadian Rockies on the set of The Revenant. The young director was almost overwhelmed by his mentor’s generosity in terms of the access he was given and the audience just loved this mentor and his protégé who seemed to be so close in their work.

The Rolex Mentor and Protégé Arts Initiative is a biennial philanthropic programme created by Rolex to ensure that the world’s artistic heritage is passed on from generation to generation, across continents and cultures. Unique to this year’s celebration was the participation of Joseph V. Melillo, Executive Producer of the famed Brooklyn Academy of Music (BAM) in New York, who was curating the Arts Weekend. He commented at the end of the weekend: ‘The performances and events that took place this year revealed the element of sharing between masters of their art and a new generation who have had an exceptional voyage through creativity. In my position as curator, I witnessed a true commitment on both a professional and personal level between mentor and protégé.” Allegra Cordero di Montezemolo, an up-and-coming curator from Mexico City, served as Melillo’s official apprentice for the Arts Weekend.