Olga Kern who is currently recognised as one of her generation’s great pianists will perform a solo recital at Unisa this Sunday afternoon, 21 February 2016 from 4pm. With her vivid stage presence, passionately confident musicianship and extraordinary technique, the striking pianist continues to captivate fans and critics alike. Olga Kern was born into a family of musicians with direct links to Tchaikovsky and Rachmaninoff and began studying piano at the age of five. She jumpstarted her U.S. career with her historic Gold Medal at the Van Cliburn International Piano Competition in Fort Worth, Texas as the first woman to do so in more than thirty years. 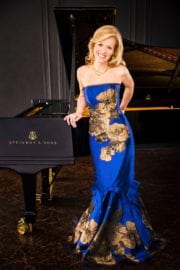 This upcoming solo showcase by Ms Kern at Unisa will feature works by Scarlatti, Mendelssohn, Beethoven and Schumann, Liszt and Boris Frenkshteyn.