Celebrating 40 years this year, the Market Theatre presents a carefully curated programme of superb theatre and musical celebration over the next few months.

A Raisin in the Sun

A family in Southside Chicago is going through its everyday struggles in the squalor it calls home. Walter Lee Younger, the eldest son of the family knows that he wants far more than life has offered him and feels trapped in this whirlwind of an existence. He knows that if things don’t change, he will not be able to even catch a breath. Writer Lorraine Hansberry explores the pain of this man, and instils the play with a sense of pathos in all the scenes between Walter and Ruth, his wife.

It is also a piece that deals with how people change with each generation, a historical document that articulates the fact that not much has changed in life, and that the questions posed a couple of decades ago are still unanswered today and the walk of those who asked those questions is not done yet.

A Raisin in the Sun, directed by James Ngcobo and written by Lorraine Hansberry, is produced by the Market Theatre, in association with the US Embassy SA, and will be showing at the John Kani Theatre from 3 to 28 February 2016.

Tobacco, and the Harmful Effects Thereof

‘Take a fly, put him in a snuff box. It will die… probably from nervous exhaustion.’ 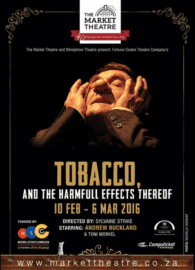 Ivan, who is not a professor, is instructed by his wife to give a lecture on the harmful effects of tobacco, even though he himself is only a small smoker. This is a hilarious and deeply poignant journey of a man trying to be heard for the first time. Following sold-out, critically acclaimed seasons at both the Baxter Theatre and the Grahamstown National Arts Festival (2014 and 2015), Tobacco, and the Harmful Effects Thereof has just returned from a highly successful run at the Amsterdam Fringe Festival 2015, as part of the Best of Fringe programme.

The Market Theatre is proud to be a partner of International Jazz Day South Africa, an initiative to establish South African and Continental Chapters of this global event that draws on the power of jazz to foster unity.

Every year on April 30, jazz is harnessed to promote peace, dialogue among cultures, diversity, respect for human dignity, freedom of expression, gender equality and to reinforce the role of youth in enacting social change.

International Jazz Day will host a variety of activations including talks, lectures, broadcast and literature. The music concerts will be rolled out as follows: Yonela Mnana directs the IJD SA youth band on 17 April 2016, The KV Mngoma Tribute lecture and Gala on 22 April 2016 an the Siya Makhuzeni Big Band Explora on 30 April 2016.